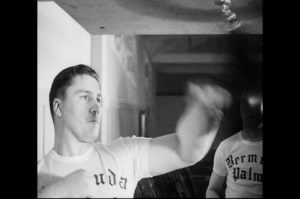 In 1983, in the shadow of a Miner’s strike that would divide the United Kingdom and a war with Argentina which would unite us, the death of a ring legend would have merited little mention. Don (Donald) John Cockell, 66-14-1, 38 KOs, The Battersea Blacksmith, had fought at light heavyweight and heavyweight and died at the tender age of only 54. He had been professionally active in the years after the Second World War, turning pro in 1946 and fighting on until 1956. During that time he was British and European light heavyweight champion, before becoming the British and Commonwealth champion at heavyweight. It is, however, his attempt to win a world title at the heavier weight that is best remembered, because he challenged a true legend of the sport – Rocky Marciano.

His backstory is fascinating. Born to a domestic servant in 1928, think Downton Abbey below stairs, he never knew his father. Living in London he became a blacksmith and soon developed the type of physique that got him into the fairground booths of the time and noticed as a prospect.

By 1946, he was ready to make his professional mark and at only 17 years of age, on the 26th of June in the shadow of the worldwide conflict that saw Nazism in its first global incantation defeated, at the Town Hall, High Wycombe, beat Trevor Lowder by 5th round knockout and so began his professional career.

Like many fighters of his time, he was never worried about a loss on his record, as he progressed through the late 40’s until he went on to challenge for the British light heavyweight title in 1950. He beat Mark Hart by knocking him out in the 14th round in Haringay on the 17th of October. The title had been vacated by Freddie Mills – another legend.

Less than 6 months later he was in the ring with Frenchman, Albert Yvel at Earls Court London for the European title, stopping the French fighter in the 6th round, who suffered only his 2nd career loss and required stitches to his lip after the contest.

In1951 he successfully defended both British and European crowns against the former British middleweight champion, Albert Finch, back in Haringay, where Cockell knocked out Finch in the 7th round. But as suggested before, Cockell was not invincible. Back at the Haringay Arena on the 5th of December 1951, he was very badly beaten according to the Boxing News, “a mere punching bag” fighting Jimmy Slade, being stopped in the 4th round.

His rise was not meteoric but typical of the time; fought honestly, even when the murky politics outside were strangers to the truth and with human and mixed results.

Perhaps his best preparation for the Marciano fight was when he defended his British title and had the Commonwealth strap thrown in for good measure against another ring legend – Randolph “The Leamington Licker” Turpin. At the time Turpin was wallowing in his two fights with Sugar Ray Robinson, in the first of which he won the world middleweight title, though he subsequently lost it in the rematch. The stars were not aligned for Cockell that night, either and on the 10th of June 1952 at the White City Stadium, London, he was sent to the floor three times before the referee stopped the contest in the 11th round.

Cockell had struggled to make weight and rather than soldier on at the lower division made the decision to move up and campaign at heavyweight. It was initially very successful, as he proved in his next few fights where he beat Tommy Farr who had shared a ring with Joe Louis, in Nottingham on the 9th of March 1953. This was a final eliminator for the British heavyweight title and on the 12th of May 1953, Cockell was in the ring against British Champion, Johnny Williams in Haringay to win the British and Commonwealth titles on points. The assault on the world title had earnestly begun as Cockell then beat Johnny Arthur in Johannesburg, South Africa on the 30th of January 1954, and then American fighters in Roland La Starza – who had run Marciano close in their fight, (10 round points win on the 30th of March 1954, in Earls Court) and Harry (Kid) Matthews twice – home AND away – on the 1st of June 1954 on points over 10 rounds at the White City, London and on the 31st July 1954 when a back injury stopped Williams coming back out for the 8th round in July in Seattle.

The only way was up for Cockell and having beaten Tommy Farr on the way to the top, he became the next British world heavyweight contender from Britain since the 1937 Farr fight with Joe Louis and took on the unbeaten Rocky Marciano for the National Boxing Association World Heavyweight title.

Cockell arrived on the Queen Mary Ocean Liner in New York for the fight a fortnight or so before it, and he looked like he was therefore film premiere, reportedly in a single breasted, tailored suit, his shirt freshly ironed and with a silk tie topping the whole look off. His look may have impressed some, but the boxing media were already preparing to print in what round he would be stopped by Rocky.

Cockell though, refused to believe their script and along with the looks, had the eye for a very different narrative. And for a time, it looked like he was the one with the best penmanship.
Whilst Marciano is an undoubted ring legend, nobody ever suggested he was a proponent of the sweet science and a craftsman in the ring. He could be crude, but he was truly effective – 47 undefeated fights testified to that. Against Cockell he used roughhouse tactics that saw the British Boxing Board of Control complain after Marciano stopped Cockell in the 9th round. Cockell had been in the fight at the start but by the 4th, Marciano dominated. By the final round of the contest, it had become so one sided that the referee had little choice but to stop it. That stoppage came after Marciano blatantly punched Cockell whilst down – it would have been a clear disqualification in a British ring. The referee ignored the breach of the rules and by awarding the win to the guy who was guilty of low blows, hitting after the bell, and according to the BBC’s Eamonn Andrews, who witnessed it – hence the complaint – “Marciano is one of the toughest champions who ever rubbed a foot in resin.” He continued, “But he has never read the rule book. He played a different sport from the one Cockell was taught. He butted unmercifully, he hit with his elbows, he hit low.” It was a travesty of fairness. One man who did not complain was Cockell himself, after all he lasted longer than most inside the square circle with Marciano.
But the writing was firmly established on his wall. After the fight, his career faltered and not long afterwards he retired. His final fight was against the “Tongan Terror” Kitione Lave, when he was knocked out in the 2nd round, at Earls Court on the 24th of April 1956.

In his retirement he tried his hand at various enterprises, including being a landlord where he told many a tale of his boxing prowess before returning to blacksmithing. He also successfully sued the Daily Mail newspaper for suggesting he was “overweight and flabby” for his last fight! Imagine that now?

Tragically he lost his life in 1983 to cancer, but it was that night in 1955, when he was at the top of the world that remains writ large as his legacy in the sport of boxing. It was a true milestone, which had it been more of a fair fight, could have brought untold riches to him. And so, to another legend, Budd Schulberg I turn for his own assessment of what transpired in Sports Illustrated on the30th May edition of that year.

“Except for the technicality of wearing eight-ounce gloves, Don Cockell’s stand against Rocky Marciano in the fading daylight hours of a cool San Francisco sunlit day was a glorious—or appalling—throwback to this pre-Marquess of Queensberry condition. This was a bare-knuckle brawl with gloves—and not a pleasant sight either—as an uncouth, merciless, uncontrolled and truly vicious fighter (the unbeaten Champion Marciano) wore down an ox-legged, resolute fat man who came into the ring with the honor of the British Empire weighing heavily—and consciously—on his massive, blubbery shoulders. He had promised his Union Jack supporters that he would not let them down, and the first words he mumbled through swollen lips after his fearful beating in nine rounds were an apology to his fellow countrymen for not having done better.”