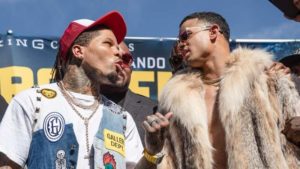 Gervonta “Tank” Davis will defend his WBA lightweight title versus No.1 ranked challenger Ronaldo Romero this coming weekend at the Barclays Center in Brooklyn, New York.

Davis is all too familiar with the Big Apple location, as the five-time world champion collected his first two championships here. And despite his formidable knockout power, the fight is receiving a deserved level of hype as two undefeated fighters with impressive stoppage records will square off on May 28 for the WBA regular lightweight strap.

The fighting pride of Maryland returns to the squared circle with nothing other than a knockout victory in mind, and with the current stoppage percentage rate he currently boasts, we shouldn’t be surprised.

Maryland sports betting enthusiasts should gear up their round props or KO/TKO wagers for their hometown hero because moneyline odds have already skyrocketed beyond the -1000 price range. Why is this so significant? Well, it’s sheer evidence that Tank lives up to his nickname, and it’s going to take an army to prevent the defending champion from his continued success.
Whether you’re a gambling man or not, Maryland bettors have been cashing on their local fighter since his inception, and without a single loss to his name, there’s no reason to stop now.

Davis has finished all but two of his professional boxing bouts with the unruly power behind his fists. There’s no doubting that he’s the most feared fighter at 135lbs, but Rolando Romero believes he owns the attributes to conquer the champ, and Davis had a few select words about his opponent.

“He’s shown me that he’s just a hype job,” Davis said. “He’s trying to hype himself up to get into the fight. It feels like he’s acting fake right now. He’s never been in this position, and you can tell. We have to wait and see what happens. He’s predicting a first-round knockout, but I’m envisioning something else.

“Many fighters are calling each other out but aren’t fighting. He worked his way up to this point and called me out. Now the fight is happening, so it’ll be great to have him on my resume after talking all that trash.

“The fight is here. I’m sure it’ll be a little tense at the press conference, but not for me. I’m only worrying about getting in there Saturday and handling business. 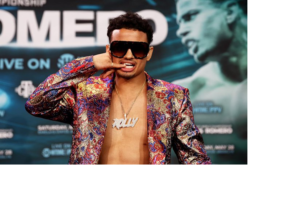 The Reality for Romero

Romero has unquestionably earnt his potion as the No.1 contender, but the 26-year-old hasn’t fought in such a high-profile bout during his career. Certain fighters are made for this, and Rolly owns an unbeaten record, so perhaps he can become accustomed to the bright lights of the Barclays Center and the added pressure. However, “Tank” is built differently, from his attitude to the delicate intricacies we watch him deliver in the ring.

Davis presents the most devastating knockout power in his weight class, and Romero notably owns 2nd best for this same attribute. But the overall in-ring technique of Davis has been carefully crafted with the assistance of Floyd “Money” Mayweather, and this is where his defensive creativity of Tank shines through.

Often staying patient with his jab, Tank will frustrate his opponents to the point where they step inside the danger zone and become victims of his fight-ending power hooks. Those same hooks get ripped to the body as the champ usually owns a size disadvantage; he flips his fortune and utilizes that lower centre of gravity to punish the opposition down low.

With an impeccable counter striker, defensive IQ reminiscent of Mayweather, and a power level similar to Mike Tyson, I think we’ll be hearing “and still” once the fight has concluded this weekend.