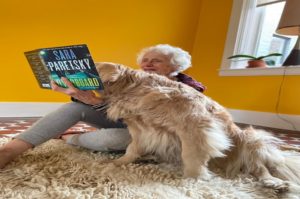 Sara Paretsky is an award-winning American author of detective novels based around V I Warshawski. Her new novel “Overboard” was published in May 2022.

KB: What were your favorite books as a kid?

Freddy the Pig. I loved “girls’” books like Little Women, Understood Betsy (the story of a scared little girl who goes to Vermont to live with her aunts and becomes tough) and those by Laura Ingalls Wilder. In detective books, I loved Freddy, who lived on the Bean Farm in Upstate NY and, along with his cow friend, were constantly solving major crimes. Whenever I’m stuck for a title, I call it Freddy and the Baseball Team from Mars.

KB: What inspired you to become a writer and why detective novels?

Books and stories have always been how I dealt with the world around me, either escaping into books or finding stories that help me understand my life and its context. I always wrote as a child and young adult, but it wasn’t until my 30s that I thought that it might be possible to write for publication. I’ve also always loved crime fiction, maybe because in most crime fiction even the most brutal acts happen for a reason and at the end of the story there is some resolution and healing, qualities that are sadly lacking in real life.

KB: I read that you did community service on Chicago South Side when you were younger? What kind of work did you do there?

In the summer of 1966, the Civil Rights leadership in Chicago put out a call for college student volunteers to work in the city that summer. Dr King was living in Chicago that summer, hoping to change the city’s intransigent policies on segregated housing and employment. Everyone feared that it would be a violent summer and we college kids were put to work in the neighbourhoods trying to help create a different reaction to diversity than guns and arson. I go into this history in some detail in my memoir “Writing In An Age Of Silence”. Basically though, I helped run a day camp for kids 6-11 that was mostly soft propaganda on living in a diverse world. I know the kids had great fun because they came back for a second 6-week session.

KB: When you created V I Warshawski in the first 1982 novel “Indemnity Only”: What kind of woman did you had in mind and whom did you base V I on?

I was part of the first wave of women to join the professions and management in large numbers in the 1970s. We were all doing jobs that were not open to women when we were in school. It was an exhilarating time although we often faced high hurdles from male bosses and co-workers. VI was meant to be one of those women, like me and my friends, except when a hurdle or barricade was put in her path, she simply knocked it over and kept going.

KB: In 1986 you created the organization Sisters in Crime to support female crime writers: What inspired you to do this? What is the story behind it?

It’s a long story, but you find the organization’s link on my website.
I also write about it more depth in “Writing In An Age Of Silence”.

KB: Except for The Pietro Andromache, the other V I Warshawski are written in the third person: Why did you write it this way? So, the reader can see it through V I’s eyes?

In Pietro Andromache I wanted to have the action seen through Lotty’s eyes rather than VI’s, but I didn’t like the way Lotty’s voice came through when I tried to write it in the first person, so I switched to the third person.

KB: The 1991 movie V I Warshawski with Kathleen Turner was based on your novel Deadlock: Where you involved in the movie, and did it do your novel justice? Was Kathleen’s performance how you created V I Warshawski?

The movie took scenes and characters from several of the books, including Deadlock. The script was in the end too much of a pastiche to work successfully. Although Turner does not resemble VI physically, she has the kind of grit that I envision for my character, and I wish the script had been stronger. She certainly wanted to make more than one movie, but it was a failure at the box office so the studio that owns the rights did not make another.

KB: Could you see yourself writing another genre besides Detective? And if yes which genre?

I have written two novels not in the series, Ghost Country (1998) and Bleeding Kansas (2008). Right now, I don’t have ideas for novels outside the crime world but the next time I do I will certainly work outside the genre again. I also frequently write essays and op ed pieces, both on social issues and on literature. A Google search would probably lead you to them. Some are also available on my webpage.

KB: If you could choose 7 of your most favorite books (Not your own): which books would you pick and why?

My favorite books tend to be what’s most recently in my mind so not an easy question for me to answer. I just read James McBride’s Good Lord Bird, which is deeply moving. I’d also include Wolf Hall (Mantel), Gilead (Robinson), Little Women (Alcot), Middle March (Eliot), Tiger In The Smoke (Allingham), A Dictionary Of Lost Words (Williams). There are many others, but these are the ones that come instantly to mind.

KB: Your new V.I. Warshawski novel Overboard was published in The UK on 5th May and on 10th May in USA: What is the plot about and how long did it take you to write it? You must be very excited!

The Overboard plot is summarized on my website. It took me about two years to write. I am extremely happy about the launch.