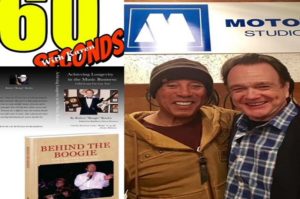 Boogie is a brilliant guitarist who played with many stars. He is the lead guitarist in Smokey Robinson’s band since 1986. His e-book “Achieving Longevity In The Music Business: I Did It, And You Can Too” was recently published. He is on tour with Smokey this year, so go check them out!

KB: Your name might not be a household name, but you played guitar on many famous songs: Can you name a few?

KB: Did you always wanted to be a guitar player? What age did you start?

I started playing the guitar when I was 12 years old. My father played and sang spiritual and blues songs. When my hands were big enough to play the guitar, he taught me the three or four chords that he knew. My first love was playing the guitar, and as my interest in music grew, I became interested in arranging, song writing, producing, and publishing.

KB: What song are you most proud of to have collaborated on and why?

I Will Survive by Gloria Gaynor It was the rhythmic pattern I created and played which became the groove for this iconic song. I recently did a remote video interview for the BBC documentary “Hits Of The 70s And 80s”. In the interview I talk how we recorded the song in two sections, spliced it together, and I demonstrated how and what I played on the recording session.

KB: You are the lead guitarist in Smokey Robinson’s band: When did you start playing with him?

1986: In1982, the Linn drum machine and keyboard synthesizers began replacing session musicians in Los Angeles. Fortunately for me in 1986 Sonny Burke, Smokey’s musical director, asked me if I would be Smokey’s guitar player and go on the road. One year later Smokey had the biggest hit of his career, “Just To See Her”.

KB: Are there musicians you have not worked with, but you would love to?

No, not really. During my career I have been blessed to have worked with such notable names as: Quincy Jones, Kenny Gamble, Leon Huff (Philadelphia International records) Tommy Bell, Freddie Perren, bassist James Jamerson, Jerry Butler, Berry Gordy, and Smokey Robinson to name a few.

KB: Are you on tour this year with Smokey?

KB: You have a new book out: What is it called and what is it about?

My first book was titled “Behind The Boogie: How I Became Guitarist For A Motown Legend”. In my autobiography, I talk about my life and career as a white R&B guitar player. I talk about the recording sessions and what it is like touring the world and playing the world’s most prestigious venues. I talk about my humble beginnings from being the grandson of a West Virginia coal miner living on a riverbank in Rand, West Virginia to being number one on the Pop and R&B charts. My recent e-book publication is titled “Achieving Longevity In The Music Business: I Did It, And You Can Too”. It is available HERE In my e-book I share the wisdom I have gained through working hands-on, with top music industry professionals, and I instruct the reader, in detail, how I have sustained a career making a living making music for the past 60 years. I did it, and they can too.