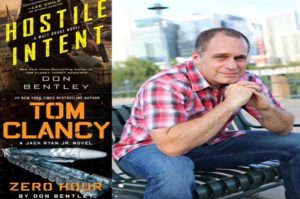 Don Bentley is a best selling author of the Matt Drake and Tome Clancy’s Jack Ryan Jr books. He is an Army Veteran who spend a decade as Army Apache helicopter pilot. He was in Afghanistan during Operation Enduring Freedom VI as a Troop Commander for which he was awarded the Bronze Star Medal and the Air Medal with “V” device for valor. After his military career he worked as an FBI Special Agent and was a member of the SWAT team in Dallas. His latest Matt Drake novel “Hostile Intent” was published last month and his new Jack Ryan Jr novel “Zero Ground” hits the book stores on 7 June.

KB: What inspired you to become a writer and what books did you read as a child?

I was always a storyteller. When I was younger, this took the form of telling myself alternate endings to books or television episodes. When I grew older, I tried my hand at what would now be called fan fiction and then eventually branched into writing my own stories. I read pretty widely as a child, but two or my favorites were The Hardy Boy Series as well as the series that began with My Side Of The Mountain. The house I grew up in had a woods in back, and my friends and I built tree houses, forts, and hunted for crawfish in its creeks. I loved the idea of living off the land like the character in My Side Of The Mountain, but I was never brave enough to run away and capture my own pet falcon!

KB: You were an Army Apache helicopter Pilot, Troop Commander, FBI Special Agent and a member of Special Weapons and Tactics (SWAT) team: Very impressive ! You have some great stories to tell! Did this experience helped you created all the characters in your books and come up with all the stories?

When I was doing press for my debut, Without Sanction, one interviewer asked me if I was my protagonist, Matt Drake. I assured her that I was most definitely not, but I told her that I have stood in the same room with men who could have been Matt. That’s absolutely true. I’ve been fortunate enough to do some pretty fun jobs, but the real benefit has been the interesting folks I’ve been able to rub shoulders with. Some of these interesting people have since become close friends, and it is through their collective eyes that Matt Drake views the world.

KB: Matt Drake and Jack Ryan Jr.: Are they a combination of yourself during your experiences in your personal life with the army, FBI and SWAT team?

Jack Ryan, Jr. was already alive and well long before I came to the Clancy franchise. That said, I think every writer brings a little something different to a series they’ve been asked to help write. I really wanted to take a deeper dive into what makes Jack tick with the hopes that as I got to know him better, the Clancy audience would too. As I said before, my protagonist Matt Drake was heavily influenced by my friends and comrades in arms. Several of my best friends were members of the Army’s Ranger Regiment, and their collective experiences heavily influenced me as I was creating Matt. Part of what makes Matt unique is his witty voice, and this is due in large part to my love for Nelson DeMille’s iconic John Corey character. After reading Plum Island, the first novel to feature John Corey, I remember telling my wife that I’d read about John Corey going grocery shopping! Hopefully Matt Drake invokes a similar response.

KB: Lee Child called your debut thriller “Without Sanction” sensationally good: How does this make you feel and how did you come up with the Matt Drake character?

Lee Child is an incredibly kind person. In addition to writing spectacular books, he really makes an effort to help up and coming writers through his outstanding blurbs. I’m a huge Jack Reacher fan and the notion that the creator of that amazing series found something to like in my Matt Drake books really did make my day. I can’t thank Lee enough for his generosity.

KB: Your first Jack Ryan Jr. book: I understand that the estate of Tom Clancy asked several writers to continue to write books about Jack Ryan. How did they approach you and what was your reaction? How long did it take you to write it?

Writing in the universe Tom Clancy created really is the chance of a lifetime. To my non writer friends, I compare writing a Clancy book to being selected to direct a Star Wars movies. For thriller writers, it doesn’t get any better. The editor for my Matt Drake books, Tom Colgan, is also the editor for the Clancy books. After I turned in the second book in my series, The Outside Man, Tom asked me if I’d be interested in taking over the Jack Ryan, Jr. series from outgoing writer Mike Maden. I was both honored and terrified. I was still working a day job at the time, and I wasn’t in a place to be able to transition to full time writing just yet. With that in mind, my first reaction was to gracefully decline, but my wife convinced me otherwise. She called a family meeting, and along with my three kids, persuaded me that we would find a way to make it work until I could write fulltime. We did, and my second book in the series, Tom Clancy Zero Hour, will be published on 7th June. It really has been a dream come true.

KB: If you could make a top 7 of your favorite books (Not your own): What would you pick and why?

I read heavily in two genres: espionage/military thrillers and fantasy. From the first genre I would choose Protect & Defend by Vince Flynn, Plum Island by Nelson DeMille, Red Storm Rising by Tom Clancy and The Defector by Daniel Silva. Each of these books both entertained me as a reader and taught me to be a better writer. From the fantasy genre, I love The Dragon Reborn by Robert Jordan, Peace Talks by Jim Butcher, and the entire Assassin’s Apprentice Series by Robin Hobb. Robert Jordan was the master of weaving together intricate plots from numerous the point of view of numerous characters. Jim Butcher writes tension like nobody’s business, and Robin Hobb hands down provides the best example of how to keep a series alive across multiple volumes while still wrapping it up in a manner that is both poignant and satisfying.

KB: Is there any other genre besides espionage/crime/thriller that you would like to write and will it ever happen?

As I mentioned before, I love fantasy, speculative fiction, and urban fantasy. I have a couple of ideas in these genres and would love to flesh them out further. Right now, I’m pretty busy with Matt Drake and Tom Clancy, but I’d love to branch out a bit somewhere down the road. We’ll see.

KB: You have a new book out: A new Matt Drake novel called ” Hostile Intent “: Tell me about the plot and how long did it take you to write it?

Hostile Intent takes place in Europe to the backdrop of a Russian invasion of Ukraine. Back when I wrote the book in 2021, the Russians hadn’t yet begun their buildup for the invasion, and it’s been quite surreal to watch my book become reality. There are some things I got right in my version of the war and some things I got wrong, chief of those being that I, like much of the rest of the world, drastically underestimated the ferocity and bravery with which the Ukrainian people have resisted the Russian invasion. The men and women of Ukraine have been an inspiration to us all.

KB: You have a new Jack Ryan Jr novel “Zero Ground” coming out on 7 June 2022 : Tell me more about it and why should people read it?

Tom Clancy Zero Hour takes place in South Korea as North Korea prepares to invade their southern neighbor. It’s more an epic military thriller novel than a traditional Jack Ryan, Jr. book. Readers will get to experience the brewing conflict from multiple point of view characters including a North Korean team of commandos that have infiltrated South Korea and a young US Army Apache helicopter pilot who arrives at his first duty station just as war breaks out. I wrote this with Tom Clancy’s Red Storm Rising in mind, and while this novel is nowhere near as sprawling as Tom’s, it was a lot of fun to write and hopefully just as much fun to read.

KB: Are you already working on something new? Is writing a continuous process or do you sometimes say: Enough for now?

I just turned in Forgotten War, my fourth Matt Drake novel, to my editor a couple of days ago and am now working on my next Jack Ryan, Jr. book. To meet the schedule demands of both the Clancy books and my own series, I turn in a novel every 5 months. This means I never really get to say ‘enough for now.’ I’m a veteran of Afghanistan, and like many of my veteran friends and colleagues, watching the country crumble during our 2021 withdrawal was devastating. Accordingly, Forgotten War is centered around Afghanistan, and it takes place in two alternating timelines: the 2021 withdrawal from Afghanistan and Matt & Frodo’s first Afghanistan tour 10 years earlier. It’s a novel that seeks to answer the question voiced by many Afghanistan veterans—was the twenty years of sacrifice for Afghanistan worth it? Forgotten War is by far the most ambitious book I’ve written to date, and I’m excited to hear what readers think.