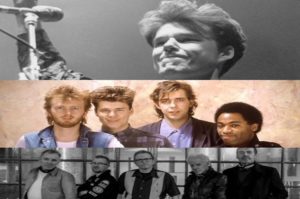 The first single “Harvest Home” was released in 1982 which was a moderate success but never reached the chart. Their next single “Fields of Fire” was a Top Ten hit in 1983 followed by the album “The Crossing”. It was a Top 20 Billboard success in America with their only US Top 40 hit “In a Big Country”.

The second album “Steeltown” entered the UK Albums Chart at No. 1 in 1984 with 3 hit singles on it. Christmas 1984 the band participated in the Band Aid charity record “Do They Know It’s Christmas?”.

In 1986 “The Seer” was released: the band’s third album with the amazing song “Look Away” on it. One of my all-time favorite songs. It was number one in Ireland and their biggest hit to this date.

On 26 November 2001, Stuart Adamson was reported missing by his ex-wife and numerous appeals were put on the band’s website for information and appeals to Adamson himself to call home.

On 16 December he was found dead in his hotel room in Honolulu. According to the police report he hanged himself with an electrical cord from a pole in a wardrobe. His body was flown back to Scotland for cremation. Condolence messages were publicly read out at the memorial service and one belonged to U2’s The Edge who said that Stuart had written the songs he wished U2 could write.

Big Country are still touring with Bruce Watson and Mark Brzezicki as the two only original members left.