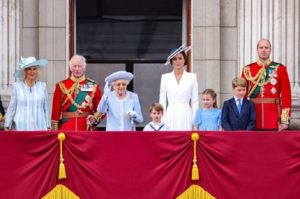 As I write this, it is Queen Elizabeth II’s Platinum Jubilee, and I am scunnered by the whole thing.

But there again I am hardly a loyal servant.

A republican by inclination, I believe in the words of my national poet Robert Burns that A Man’s A Man for a’ that. It tells me that we are all born equal.

The Royal Family, however, prove George Orwell’s maxim that some are born more equal than others.

I don’t blame them.

Nobody can help the circumstances in which they have been born. And they are genuinely nice people. I have met a few of them and they are thoroughly pleasant.

They even do some good. There are foundations in their name and causes to which they have become attached which have greatly benefitted from Royal Patronage. Businesses too have managed to expand because they have been given Royal Seals of approval which mean that they can employ more and contribute more to the Commonweal.

But then again nobody can help being born into the circumstances in which they find themselves. There is no reverse button on birth that means you can retreat into your womb and wait till mom and dad get themselves sorted. You get out the warmth and into the reality: whatever that may be.

In Scotland, the land of my birth that means that one in four children were born in 2021, into poverty.

Of those children who are in such poverty, 68% of them – the vast majority – live in homes where there is one adult working. That means that earning a wage and working to make ends meet is no guarantee that you will be able to care and look after your children daily.

No, you cannot help where you are born into.

Children who are born into relative wealth by comparison, do better in school, by the age of 5. It means that children from lower income families shall see their friends and their contemporaries begin to develop the gap they shall enjoy for the rest of their lives from kindergarten. Of course, they are unable to express it properly as their language development is not equal to their “betters”.

For those less fortunate, a fair bit of their time will also be spent at clinics and hospitals as poverty brings greater access to chronic illness. Pain and suffering may not be in their DNA, but what comes next, lifelong conditions which deny them the ability to be fully physical functioning specimens is waiting just around the corner. And beyond that for too many, just around, is the coroner. Their life expectancy is shortened.

You may be fortunate of course and your body may be able to sustain you but, of course, your mind may not be quite as robust. Children in poverty are three times more likely to suffer poor mental health. Some people think mental illness is some form of fad or fashion and that young people are less resilient than ever before. They get tagged with being the snowflake generation. But if you believe that poor mental health is not a serious condition, then perhaps you would like to remove the misery memoirs of celebrities that you bought on Amazon.

The frustration at the injustice of life can lead some children and young people, without access to proper legal counsel to end up in our criminal justice systems. In Scotland we do not deal with most offences by minors, through the Courts but take a more community-based approach through a system of Children’s Panels to help address the emotional and behavioral issues that poor parenting, social deprivation and criminal enterprise may bring. But of the 15,000 plus children and young people who have become part of an imperfect system of Care in Scotland, right now, the vast majority come from households in poverty and over 80% of children in care are there through no fault of their own.

It is quite clear that you cannot escape the reality into which you are born.

And whilst the poverty stricken many are dealing with how they feel about the now, the privileged few are having Millions of tax payer’s cash splashed on celebrations.

In fairness, some of the cash is being spent on legacy projects which shall see books delivered into libraries and green spaces for the environments enriched as well as local buildings and amenities given vital funding to make them more usable.

But then the headlines shall be about Prince George on the balcony at Buckingham Palace holding onto his ears as the fighter jets are too loud, about how Rod Stewart sang a cover version rather than one of his hits and whether Harry or Meghan or both are actually welcome at the events. They shall not note that Queen Elizabeth II (We have never had a Queen Elizabeth I in Scotland so the very title is a problem for us, not least because Queen Elizabeth I of England had her cousin, Mary Queen of Scots beheaded…) once per year sits on a throne with a crown upon her head the cost of which would wipe out our poverty.

It makes me totally scunnered.