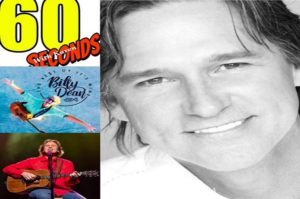 Billy Dean is a Country singer known for his hits “Billy The Kid” and “Somewhere In My Broken Heart”. He will be releasing a new album on 22 July: “The Rest Of It’s Mine” and is currently on tour through the US.

KB: You started playing in your father’s band The Country Rocks when you were 8? Did you know at such a young age that you wanted to be a musician and singer?

Yes.. My Sophomore year my teacher said I should just go to Nashville and not worry about algebra ha ha

KB: Your 3rd single “Somewhere in my broken heart” from your debut album became huge ! I adore that song. What is the story behind that song ? Sounds like a break-up song?

It’s a song about loving someone enough to let them go find a place in life not knowing if they will return. Last girl I dated before moving to Nashville gave me that freedom without guilt.

KB: In 1993 you opened for Alan Jackson during his tour. By then you already released 3 albums? Did you not want to have your own tour?

The Alan Jackson tour was going to be launching me into my own headlining tour. We spent the next year if I remember correctly headlining state fairs. We did not feel like we had enough top 10 hits or albums sold to tour as a headliner all over.

KB: Your album Real Man was released in 1998. The song “Innocent Bystander”: I love that song. What is the story behind it? What is it about?

I wrote that song with one of my heroes David Gates from the group bred who produced the real man album. We were having a lot of fun with country music puns, and the song started with a guitar riff which felt like it fit the idea. It also describes how love his always blindsided me when I wasn’t looking for it.

KB: You have an event that you do called Song Sessions : what do you do here and who is it for?

We help corporations discover new language through songwriting that describes to the heart of what they do. Through songwriting, we usually can steer them away from bland, cliché, corporate Language we feel is used in several companies.

KB: You can make a new album and can pick 7 existing hit songs that you will cover: Which songs do you choose and why?

I would record: Sailing by Christopher Cross, Country Road by James Taylor, Leader of the band by Dan Fogelberg, All Black water by The Doobie Brothers, 50 Ways To Leave Your Lover by Paul Simon, Illegal Smile by John Prine and Please Come To Boston by Dave Loggins. Believe it or not these songs help define my country music career helping me find my own lane. I love the guitar work in these songs.

KB: Do you have anything new in the pipeline? New album, New tour, New movie or series?

The new album is called “The Rest Of It’s mine”. The title track I wrote and sang a duet with Hall of Fame songwriter singer Paul Overstreet song and video comes out May 15 and the album comes out 22 July. The album includes a remake of Somewhere and my broken heart celebrating 30 years ago Being the ACM song of the year. It is a bonus track recorded with an orchestra and will be released this fall. We have started a new tour called The Country Come Back tour with Shenandoah and Wade Hayes: 90 minutes of 90s country music, starting 2022 and running through 2024.