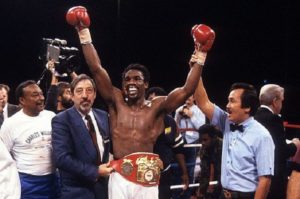 During the late 1970’s into the 1990’s he was a Prince attempting to be the King of the light heavyweight division. He did manage to obtain the IBF title and held it for 6 years but Prince Charles Williams, 37-7-3, 28 KOs, was oh so much more than that one belt.

His early life was spent in Columbus Mississippi, and according to an interview with The Ring Magazine, he learnt the hard way just what was what! When he was 7, his mother then moved the family all the way to Ohio. He reflected in that Ring Magazine interview, “Very difficult growing up. Nine kids and a single mother, [she] didn’t give us everything we needed, we suffered a lot. Not being able to have this, have that; have clothes, have stuff for school.”

By the age of 14 he found a new home and family – in a boxing gym. Following his elder brother there and given that within his family, his sister also seemed to be able to “whoop me all the time” it seemed the logical pattern to follow. His amateur career lasted 34 fights and he only lost twice. One of those losses was apparently at the 1977 Junior Olympics against Tony Ayala.

He turned professional in June 1978 with his debut against Henry Bunch on the 28th and he lost on points over 4 rounds! Bunch had been an Olympian so a tougher beginning to the professional game would be hard to imagine! Mind you, he only drew his second fight, so improvement may have been evident but not enough to suggest this was a future world champion.

His first contest for a title came in only his 12th professional contest on the 29th of October 1981 at the Packard Music Hall, Warren, when he was beaten again, stopped in 6 by Jeff Lampkin for the Ohio State light heavyweight title. Lampkin went on to become a cruiserweight world champion, who had baited him, taken his time and then picked his shots to get rid of Williams. It was after this fight that a young naïve woman, Jerry Stapleton, who saw him in that contest, contacted him and offered to buy out his contract as she felt he was being let down by his manager. Given his lack of progress, it was hard, it would appear, to refuse, and Stapleton became his manager.

Four years later, in Atlantic City, Williams was to get his revenge, knocking Lampkin to the floor in the 10th round of a 10 round points win.

Meanwhile, his new manager, Stapleton had no experience and though she wanted to get into boxing, she was a rawer novice than he was. Back in that interview with the Ring Magazine, he was to talk of a “watershed moment.” In 1984, on the 8th of November in Indianapolis, Williams faced Marvin Johnson across the ring and then came the catapulting of his career as Johnson’s promoter took him on to promote and brought Marty Feldman in to train Williams. It was another loss that ended with a real win for him.

In 1986 he won the USBA light heavyweight title back in Indianapolis when he got a majority verdict against James Salerno, despite sending Salerno to the canvas twice in the fight – one of the judges still scored it a draw.

He was a contender. On the 29th of October 1987, he faced Bobby Czyz in the ring in Las Vegas. He had to rise not once but twice from the floor – in the 2nd and 3rd rounds – to shock the world and take the title with the referee stopping things in the 9th due to Czyz’s right eye closing. The excitement was so intense Williams never recalled being interviewed after the fight! It was such a shock because Williams was the rank outsider. And in the beginning of the fight Williams was being outfought but he gained the respect of the champion before battering him back in style.

In 1993, he lost it to Henry Maske in Dusseldorf, Germany, on the 20th of March widely on points.

But he was still in the fight game and went on to do something quite unusual and drop to super middleweight to take on James Toney for the IBF super middleweight title on the 29th of July 1994, but he was knocked out by Toney in the 12th round. In the MGM Grand, Las Vegas the crowd saw Toney at his height and Williams facing his descent.

Despite Williams’ own assessment that he was well beaten and was without power at his new weight, the fight was highly competitive. With only 15 seconds left in the fight, Toney connected with a sweet right hand that halted the contest and left Williams contemplating his future.

Fortunately, for fight fans, that still included boxing and he went into a double bill of absolute wars when he faced Merqui Sosa twice for the NABF light heavyweight title. It was reported that the first was stopped because it was “too brutal.” Both were quite simply so beaten they could not keep going! According to Williams, “They just stopped the fight because neither one of us could continue. We made history there, first fighters to ever do it.” It was scored a technical draw.

Six months later they did it all again. This time Williams was stopped in the 10th round and left on a stretcher.
It was time to retire.
He did have one last hurrah, in France, on the 24th of March 1996, in Nice before the gloves were put up for good and he called time. Perhaps the time between his hand injuries meant his reign was longer than it ought to be but for blood, guts and glory, there can be little doubt that he paid his dues in the ring. In Mansfield, they even recognized that by naming a street after him!

A local report quoted the following testimonial which I cannot better –

“‘Prince’ Charles Williams did a great service to the Mansfield area,” Mayor Tim Theaker said. “He represented Mansfield in his boxing endeavors and it’s only fair and nice that we are able to turn around and rename a portion of a street after him.”