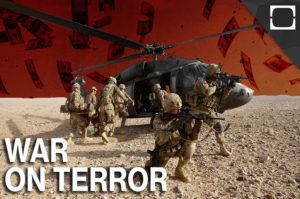 Maybe the time has come for us to take an age-old piece of good old Scots advice and dinna fash about how we look in the war on terror.

The United Kingdom has more experience than most in dealing with terrorism. For a distinctive period of my life, from birth through to the 1998 Good Friday Agreement, death, bombings and the terror of two sides of one conflict were frequent news items. Place such as the Shankhill, Antrim and Enniskillen became known to the ears of the mainland from the province across the sea.
Terror was not limited to Northern Ireland and it crossed the Irish sea to leave scars on the likes of Brighton and Manchester as well as include a mortar bomb attack on the residence of the Prime Minister, Number 10 Downing Street.

We eventually realized that we needed to do something different to stop it.

For years there had been talks and links between the paramilitary terrorists and the British Government through a variety of channels to find common ground. It was far from easy. It was also done in secret because we knew what it would look like to the general population.it would look like we had lost the war.

Tensions remain to this day and the sectarian feuds that gave oxygen to the conflict still exist. There are consistent opportunities for both sides of the conflict to return to the stage of terrorizing their respective communities through violence. It has been a tightrope walked for a generation.

We are now 20+ years down the line since peace was declared in Northern Ireland. The announcement by the Irish Republican Army (IRA) that the armed struggle was over was significant then, but it was not down to them winning or the concessions being given an announcement by the British Government that they had lost. It was recognition that a democratic process was the best way forward. It was a principled stance that no matter the past, the future needed to be better.

In short, they all grew up. We stopped worrying about how it looked.

And so, when any news report arrives in the UK about terrorism somewhere else in the world, it is hard not to feel we have something to say or advice to give. The Kansas woman, Allison Fluke-Ekren who has admitted to training over 100 women for IS in Syria is a case in point. It looks like she faces 20 years in prison which, given her terrible responsibility in creating a battalion of female fighters and leading them in the war, may be wholly justified.

The question for me, would be why did she leave the US in 2011 and go to Syria to join that fight? What possessed her to feel that this was the right thing to do?

The reports over here, have concentrated on the heinous nature of her crime and the terrible and vindictive way she had conducted herself. That may be, absolutely, the right focus for the moment.
But.

The reason why she and many others go to take up Jihad against their own is simple. Their sense that this is the right thing to do is based upon the actions of their own. After every mistake the British Government made in Northern Ireland the recruiting sergeants of the paramilitaries had an easier job of it. It made the fight against terror was a wasteful battle. We lost many innocents in trying to defeat an enemy which after we managed to win ground militarily, replaced the martyrs with 10 more.

We tried to stop making mistakes and once the Good Friday Agreement negotiations got under way the sense of grievance was lifted. The arguments to put your heart and soul into the dangerous conflict was removed. How could you fight with people willing to talk to you, listen to you and reason with you?

Of course, IS lack some of these people. Given the way in which the Taliban lied their way back into some form of international acceptance it is difficult to respect a caliphate’s way of doing things.

There are rights which are inviolate.

But trying to beat them into submission does not work. Every attack that ends with civilians injured means that we have more martyrs to fight as their cause is legitimized. The invasion of their homelands without a way of leaving already mapped out means that when we crawl out with our tails between our legs, we leave a legacy behind which was not our reason for being there.
As long as we keep repeating the mistakes and trying to win a “war” on terror, all we do is make life worse for them, dangerous for us and less fertile for the freedom and democracy we crave for them.

It is time to grow up.

Perhaps not yet as we are raw from these conflicts but soon and try not to have a military response for everything, but a diplomatic effort should be pursued as we did in Northern Ireland. Trying to talk to our enemies was the way forward. As a movement we should fash less about what people want to do to us and more about the unpalatable but effective means of trying to stop them. Then people like Allison Fluke-Ekren have no legitimate reason left to channel their anger into becoming the means of war.