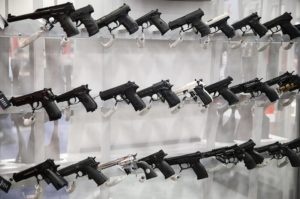 The uproar and furor over and about the totally thoughtless and utterly inane and insane decision by the U. S. Supreme Court which now allows anybody and everybody who wishes to buy any type of murder instrument was not only shameful beyond words, and not only does it completely ignore the actuality, truth and facts of and about the Second Amendment to the Constitution and why it was put into that sacred document, but by ruling as they did, the six FAR right wing fruitcakes on that court, who are no more qualified to be neutral arbiters of the law and of federal legal issues (You don’t think so? Look at who or whom that lowlife, thieving, unscrupulous, corrupt degenerate Herr Trumpler appointed to the court) than I am to be a nook-you-ler (actually, the pronounciation of “nuc-le-ar” is “nook-lee-er” and the only “u” in the word is between the first letter, “n,” and the third letter, “c,” and not following the “c” and before the remaining letters, but morons such as little Georgie Bush, who was a numbskull and a nitwit, couldn’t read or pronounce the word correctly) than I am to be a nuclear physicist, and the only thing I know about physics is that they are to be taken when constipated.

Before we discuss the “different perspective” on why the decision was so horrific and will have such hideous consequences, a note must be made regarding the wording of the Second Amendment to the Constitution.

It is more than obvious that the numbskulls on the Supreme Court, the female-abusing lowlifes, one black and one white, the woman who is a born-again piece of garbage and the other three, all of whom should be utterly ashamed of themselves, claim to have put forth a “broad interpretation of the Second Amendment, and if there ever was a crock of crap, a bunch of lying slop coming from any person on any judicial bench in the country, that is absolutely and positively it.

The first words of the Second Amendment make it utterly clear that the reason and purpose of and for that amendment was to insure that there would be a well-regulated militia (known today as the National Guard) and it was those individuals who were to be given the right to keep and bear arms, not every schmuck who has ever lived and who wanted to (and in too many cases enjoyed, enjoys and will enjoy in the future) shoot other people or animals just for his or her amusement or to be used in the commission of a crime. Clearly, the opening phrase of the Second Amendment is this: “The need for a well-regulated militia being evident, the right of the citizens to keep and bear arms shall not be infringed upon.” Again, note the opening nine words of the amendment, which make it clear that it will be those people who are part of a “well-regulated militia” (the term “National Guard” came years later) who should have the right “to keep and bear arms.”

But now let us address the real crux—at least to me—of and about not just the folly but of the utter criminality of the court’s decision, and, frankly, everyone of those nitwits who voted to gut all U S gun laws should now be held liable (yes, I am serious, and mean this absolutely) for every crime committed by any person using a firearm in this country and all six of those lowlife prevaricators should, literally, be charged with a crime each and every time a gun is used to commit any type or kind of crime in America.

“But wait, there’s more,” and “the more” truly and absolutely presents the horrificality of the decision.

For some years it has been difficult enough for America’s police agencies, at all levels, to contain crime, especially when dealing with murderous nutcases who have no qualms about or problem with engaging in gun battles with police. That was bad enough, and, yes, please don’t give me the nonsensical crap that “if guns are outlawed, only outlaws will have guns,” which was an N R A fairy tale used for years to get gun laws loosened, because “outlaws” were able to get guns even with the laws in place by lying, stealing, or presenting false documents when purchasing a firearm, but now, thanks to this monstrously shameful decision, anybody and everybody can walk into a gun shop or a gun show and buy a weapon, and the outcome for the police will be devastating.

Yes, I could continue this discussion, but, hopefully, our readers have gotten the point, and, even more hopefully, even if “you” are “pro-gun” you will agree that adding this major issue of possible harm which will likely come to and further burden our protectors and defenders against criminals through and by this decision will likely be cataclysmic and calamitous. And no, I will not be proven wrong, especially when one looks at the school and other mass murders by the various and sundry lowlifes and pieces of manure using automatic weapons, that horror inflicted on the public because that shot head, that piece of detritus, little Georgy Bush, wouldn’t extend the ban on automatic weapons.

Folks, you may not love it, but I have told it like it is, and if this column insults you, please, be sure to tell your friends.