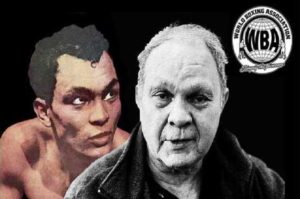 There have been plenty of obituaries, all of which seem to agree on one simple fact – this is a guy who did not get the recognition he fully deserved. Carlos Ortiz, 61-7-1, 30 KO’s, died in June 2022 at the age of 85, having fought at lightweight and light welterweight. A Puerto Rican, born prior to the beginning of the Second World War, his rise and career may be way in our past, but as a significant figure in the sport, there is no doubt that he was a massively important figure.

How could he not be? A two-weight world champion? Someone whose defenses of his unified titles at lightweight was in double figures and who was inducted into the International Boxing Hall of Fame in 1991. The first Puerto Rican fighter to win titles in two weight divisions and only the second Puerto Rican to be a world champion! And he did it the hard way – often on the road.

Professionally he began on Valentine’s Day 1955, knocking out Harry Bell in the 1st round in New York at the St. Nicholas Arena; he as 18 years of age.

It took until he met Johnny Busso in 1958 at Madison Square Garden when he was given the first loss – by split decision over 10 rounds – on his record. He had gathered a reputation as a fearsome opponent by that time and as I often say, this was a time of competitive boxing where a loss was less of a deal than it is now. However, Ortiz avenged it 3 months later at the same venue on points over 10 rounds straight after!

We did see him in the UK when in that selfsame year, he came across the pond to take on Dave Charnley. He won in the Haringay Arena, on points. It was a notable win as Charnley believed to be one of the top fighters of the time and future challenger for belts.

Instead of Charnley, it was Ortiz in the ring on the 12th of June 1959 against Kenny Lane – Charnley had to wait until December to get his chance – for a world title – the junior welterweight title. Lane had previously fought Ortiz and given him his second loss – by majority decision over 10 rounds – on his record, so this was a tasty fight. Ortiz stopped Lane at the tail end of the 2nd round thus winning the crown.

Ortiz was only the second ever Puerto Rican world champion. It was barely noticed, as the title had been vacant for 13 years and despite a couple of defenses – both successful – knocking out Battling Torres in Los Angeles in the 10th round on the 4th of February 1960, and then Duillio Loi on a split decision points win in Daly City on the 15th of June 1960 – there appeared to be little danger of a ticker tape parade for the champ.

He lost his title when he rematched Loi, in Milan on the 1st of September 1960, and then lost again to Loi again in Milan, on the 10th of May 1961 when he tried to get his belt back, on points.

Having lost his world title – what next? Ortiz went down in weight, confounding orthodox thinking that losing a world title would ordinarily suggest a struggle at the weight and the time was ripe to move up divisions.

At lightweight he challenged Joe Brown who had beaten previous opponent Charnley and won a decision on the 21st of April 1962, in Las Vegas. A two-time, two-weight world champion, he had still not fought at home, though he was now, and he was now the WBA lightweight belt holder! His first defense of his title took him to Tokyo and on the 3rd of December he knocked out challenger Teruo Kosaka in the 5th round.

Then he made is Puerto Rican debut.

On the 7th of April 1963, in San Juan he knocked out Douglas Valiant in the 13th round to keep his title and add the WBC version. He was now the unified champion! There was still no ticker tape parade.

Defenses followed with a 14 round stoppage against Flash Elorde in the Philippines on the 5th of February 1964, a successful rematch with Lane in San Juan, on the 11th of April the same year and then in Panama on the 10th of April 1965 he lost his titles to Ismael Laguna.

But he got them back. On the 13th of November 1965, he rematched Ismael Laguna in San Juan and he was back as champion in a points win! His first fight against Laguna had had Jersey Joe Walcott as referee – the rematch had Rocky Marciano as ref!

The year, 1966 saw defenses -all successful – against Johnny Bizarro, stopped in the 12th in Pittsburgh, Sugar Ramos, knocked out in 5 rounds in Mexico City and Filipino Flash Elorde – knocked out in New York in 14.

In 1967, Ortiz met the familiar foes of Ramos, in San Juan and this time stopped him in 4 on the 1st of July, and then met Laguna again in Queens New York on the 16th of August and the 15 round points win saw Ortiz retain his title once more.

And then came the 29th of June 1968 when he lost his lightweight titles to Carlos Cruz on points in the Dominican Republic against the hometown fighter on a split decision.
He never fought for titles again, but he did fight another Brit, this time a Scot – the legendary Ken Buchanan. Buchanan, a replacement for the original opponent, Roberto Duran was happy to oblige, though not enthusiastically so.

In Madison Square Gardens on the 20th of September 1972, Buchanan did something which had never been done before – he stopped him. In the 6th round at MSG Ortiz was stopped in the ring and was stopped in his career, retiring from the sport directly afterwards. Though what a night! It was on the same card as Ali/Patterson II!

I started by saying that many felt he never got the recognition he deserved so let me finish by quoting three people who did give him that recognition. Firstly, the WBO, for whose belts he fought so bravely, they announced his death with the following words, ““The WBO family is mourning the passing of legendary Lightweight and Jr Welterweight champion Carlos Ortiz. Born in Ponce and raised in New York, Ortiz was one of the best and most popular fighters of the 1960s. Rest in peace.”

In the Boxing News in the UK, senior US correspondent Jack Hirsch wrote, “”A master boxer/puncher, Ortiz was considered one of the greatest lightweight champions. He still is to those of us who remember…”

But the greatest quote, comes from a Scotsman…

In his autobiography, The Tartan Legend, Buchanan wrote thus, “Ortiz was no mug- he had made a comeback at welterweight and had won ten out of ten fights since. Not only that – nine of them were by knockout! … The funny side of Carlos’s story is that when he was told that he was boxing me instead of Duran he insisted on being paid $10,000 more. He said I was a harder opponent than Duran!”

The respect was clearly mutual, and so should our admiration following boxing’s loss.