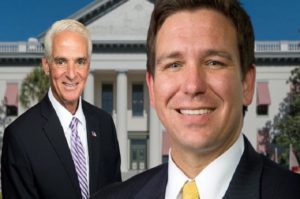 Democratic Congressman and Gubernatorial Primary Candidate Charlie Crist’s campaign recently shared a poll that showed Crist slightly leading incumbent Republican Governor Ron DeSantis. The poll showed Crist currently winning 48% of the vote to DeSantis at 47%. If true, this may mean that the Democratic front runner has a chance at going back to the Governor’s mansion. Crist is in a primary race against Florida Agriculture Commissioner, Nikki Fried, but the odds are heavily in his favor.

While this could mean great things for the Florida Democratic Party, it’s not to be forgotten that DeSantis has raised over $100 million this election cycle. He also has been favored by Republicans across the country for his response to COVID-19 (aka nothing and blaming Fauci). The referenced poll is apparently one that was conducted by Tony Fabrizio, who is a veteran GOP strategist and pollster per Newsweek’s report. NBC had also referenced the poll in their reporting.

DeSantis has been seen as a strong potential candidate for the Republican presidential nomination in 2024. Samantha Ramirez, a spokeswoman for Crist, said of the poll, “This GOP poll shows Floridians are tired of DeSantis’s singular, selfish focus on the 2024 presidential election and ready to usher in a new leader that can actually address the real affordability burdens Floridians are dealing with all across the Sunshine State. Charlie is the experienced fighter Floridians need and want in Tallahassee right now.”