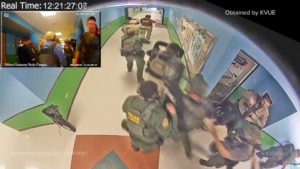 The video footage from surveillance and police body cameras has finally been released, and the images are even more disturbing than one could ever imagine. Details in this article are extremely triggering and upsetting, so I advise proceeding with caution.

It’s been seven weeks since 19 children and two teachers were shot to death at Robb Elementary School in Uvalde, Texas. The weeks following the tragedy have been filled with questions and almost no answers. On Tuesday things took a turn after the 77-minute video footage became available for the families and public to see for themselves.

The footage starts with the gunman shooting at two people who went to help him after crashing his truck near the school. The gunman fired at the two causing them to flee and call 911. Moments after he fires the weapon, the teenage shooter gains entry to one of the school’s buildings (and no, a door was not propped wide open like officials had previously claimed). The gunman pauses while looking down the hallway, flips his hair, and begins making his way down the hall when he stops to peek into classrooms 111 and 112. Eerily, the video also shows a young boy walking from the bathroom who goes to turn down the hallways until he spots the shooter and freezes. In the moments following, excessive gunfire can be heard and thankfully the little boy ran back down the opposite hall; escaping a bloodbath by seconds.

At this point, the gunman enters one of the classrooms. While we can’t hear it in the footage circulating for the public to view due to editing choices, the Austin Statesman which originally published the footage notes that it is at this point where children screaming for their lives can be heard followed by a barrage of gunfire. He continues shooting on and off, over and over again. Three minutes afterwards, the first set of law enforcement officers can be seen running down the hallway to the classrooms. Gunfire erupts again, and the officers run back down the hallway seemingly fleeing from the horrors happening a few doors down.

Over the next 77-minutes, the video shows how local, state, and federal law enforcement officials — who were heavily armed with weapons themselves, body armor, protective shields, and helmets — spent that time. Spoiler alert: they weren’t making entry into the classrooms and saving the lives of those in rooms 111 and 112. Some can be seen walking back and forth, aiming weapons towards the direction of the gunman’s location, looking at floor plans, talking, making calls and sending texts. One notably checks his phone that has the Punisher skull as the background, while another shockingly grabs some hand sanitizer. Another leans his protective shield against the corner of the wall. No one — and I mean NO ONE — tries to save those who were still hanging onto life in the classrooms. It isn’t until over 77-minutes after the shooting began that we see a group of officers, who ended up defying chain of command’s orders, finally break into the rooms and ultimately kill the gunman.

The massacre that happened on May 24th has since sparked a new fire in the national debate regarding the Second Amendment, including the extreme gun violence problem we have in America. Even worse, however, is that we have had multiple mass shootings since Uvalde like the July 4th parade shooting in Highland Park, IL.

Yet debating is one thing, actually seeing for yourself one of the worst massacres in American history with an equally terrible police response may change things up. It’s impossible to watch the footage and know what ends up happening without crying. The rage has boiled over in the small Texas town where residents have blatantly stated they no longer trust authorities and are demanding real answers. I truly hope they get them, and that this footage changes the minds of people who have teetered on the fence of whether we need updated gun control efforts.

As for the little town of Uvalde, it’s time the families of the victims get some sort of closure if any is possible. While their mayor blames the “chickenshit” journalists and media for releasing the footage and causing more harm, maybe residents can start by demanding his resignation along with the chickenshit officials who caused the death toll to be much higher due to their failure to follow their oath of protecting and serving. To the victims, survivors, and those left behind to pick up the pieces of their lives after this horrific catastrophe, I’m so sorry you have been failed like this.

The American dream has turned into a nightmare full of firearms and ricocheting bullets. We have to do better, and we have to do something soon.