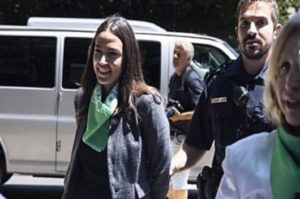 At least 17 Democratic officials were among those arrested at an abortion rights protest in front of the Supreme Court on Tuesday. Some of the representatives included members of “the Squad” and House leadership, like Reps. Alexandria Ocasio-Cortez (D-NY), Ilhan Omar (D-MN), and assistant speaker Katherine Clark (D-MA) who holds the No. 4 position in Democratic leadership.

Rep. Katherine Clark (D-MA) released a statement after her arrest, “The extremist Republican Party is determined to take us back in time and take away our rights. I refuse to stand on the sidelines as their rampage continues. I am furious and heartbroken, and I will proudly fight for our right to abortion and all of our Constitutional rights. They can arrest me, but we won’t allow them to arrest freedom.”

Thirty-five people, including the 17 representatives, were arrested for blocking traffic. The protestors were peacefully expressing their dismay at the Court’s recent overturn of Roe v. Wade. Those arrested were cited for “Crowding, Obstructing, or Incommoding.” Law enforcement officials stated they had “already given our standard three warnings. Some of the demonstrators are refusing to get out of the street, so we are starting to make arrests.”

@BadBradRSR That s why he can’t be above the law!! I don’t care what people say how many crimes do you have to commit to be a criminal I think we are 60 years plus of crimes with him !! There is no list long enough but yet he is not in Jail where he belongs like any other criminal ! The End