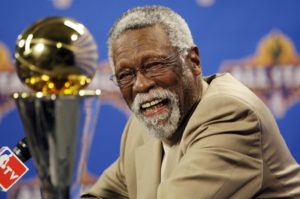 Bill Russell, a Pro Basketball Hall of Famer and Boston Celtics legend passed away July 31, 2022 at the age of 88.

Considered one of the greatest basketball players of all-time, Russell is one of the most successful and decorated athletes in sports history. He was an important part of the Boston Celtics dynasty. He played center from 1966-1969 and was coach from 1966-1969. He led the Celtics to winning 11 NBA titles in a 13-year span. He was a five-time NBA MVP and a 12-time All Star. He also became the first black coach in a major American sports league.

Russell was also known for his involvement on civil rights issues. He took part in the 1963 March on Washington for Jobs and Freedom and sat in the front row to hear the Rev. Dr. Martin Luther King Jr. Deliver his “I Have a Dream” speech. In addition, Russell went to Mississippi after the civil rights activist Medger Evans was murdered and worked with Evers’ brother, Charles, to open an integrated basketball camp in Jackson.

For Russell’s efforts to promote change in civil rights, he was awarded the Presidential Medal of Freedom by President Barack Obama in 2011, being honored as someone who stood up for the rights and dignity of all men. A well-deserved honor indeed!

Ringside Report sends our condolences to Bill Russell’s family during their time of grief.