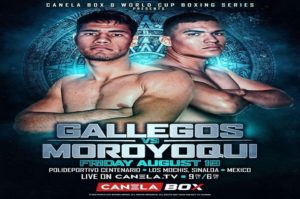 “Canela Box Nights” will be held and streamed live for free the third Friday evening every month in Mexico.

The most recent WCBS signing, super-middleweight Manuel Gallegos (19-1, 16 KOs), has a legitimate shot at developing into the next star from Los Mochis. Gallegos appears to have the size, strength, skills, and chin to go deep in the loaded 168-pound division. Two fights ago. Gallegos defeated former Showtime and TMT fighter, Kevin Newman II (13-3-1, 8 KOs), of Las Vegas, by way of a close 10-round unanimous decision a year ago.

“I’ve had the privilege to sit ringside and watch both men fight on separate nights and when the opportunity came to make this fight happen it was something we couldn’t pass up,” explained Taylor. “Now, if you are a boxing purest and love the whole ‘hit and not get hit’ style, this main event match-up may not be for your favorite, but if want to see a fight with no pretense of defense then you better tune in on August 19th to CANELA.TV”.”

Moroyoqui had a good amateur career with more than 100 fights and as a pro he has already defeated two previously undefeated fighters. Moroyoqui’s last fight resulted in his first pro loss to current world-ranked, undefeated Diego Pacheco (15-0) on DAZN.

The 8-round co-featured event will serve as a great “table setter” as one of the top prospects in all of Mexico and member of the Mexico’s famous Montiel boxing family, super lightweight prospect Jorge Lugo Cota (7-0, 5 KOs), also from Los Mochis.. An outstanding amateur who had a record of 155-10, coupled with numerous state and national championship performances, Cota takes a huge leap up in class versus former world title challenger Jesus Antonio Rubio (13-5-2, (7 KOs).

Rubio defeated former world-ranked challenger and United States Boxing Association (USBA) Champion Sonny Fredrickson (21-3) back in the spring of 2021. Defeating Fredrickson earned Rubio an opportunity to fight for the vacant World Boxing Association (WBA) Interim Junior Welterweight World Championship against undefeated Alberto Puello (20-0) a year ago albeit dropping a 12-round decision. In Rubio’s last action, he fought to an 8-round split draw with Angel Martinez (14-1, 14KOs).

“I have always been known as an aggressive matchmaker in my 20 years of doing, but this is overly aggressive even for me,” Taylor noted. “We have the utmost confidence in our fighter (Lugo) and for him to make his first eight-round fight against a past world title challenger should tell you all about the confidence he has in himself.”

Canela.TV is available for download on Roku, Apple TV, Android TV, Amazon Fire TV, as well as through linear channels on Samsung TV Plus, LG, Vizio, Plex, Distro TV and available through iTunes and Google Play. Users can find a wide variety of content, including soap operas, news, movies, television series, cooking shows, among others, through the Hispanic lens. For additional information on Canela.TV please visit: https://www.canela.tv/

ABOUT WORLD CUP BOXING SERIES (WCBS): World Cup Boxing Series is your passport to the best online fights you’ll ever see. WCBS is the only active tournament and team fight series in professional boxing. For years, its creator Guy Taylor has been tasked with creating tough, competitive matches for promoters eager to test their rising prospects and contenders. That same mindset has now been applied to his own latest creation, World Cup Boxing Series. For more information, please visit https://www.worldcupboxingseries.com/

Hello @DanRather how about being interviewed with Bad Brad?

Need everyone’s help to see if I can get our beloved .@DanRather to sit with me for a 360 Conversation on The “Bad” Brad Berkwitt Show…

It would be an absolute honor…

I’ve been asked to comment because I worked in Intelligence for decades.

What Trump did with classified material would have had my troops/me locked up!

Republican officials saying “I stand with Trump” are traitors.