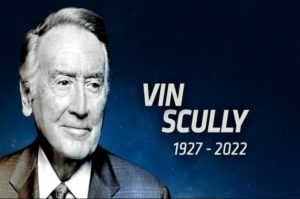 In addition to Dodgers baseball, Scully called various nationally-televised football and golf contests for CBS Sports from 1975-1982 and was NBC Sports lead baseball play-by-play announcer from 1983-1989. He also called the World Series for CBS Radio from 1979 to 1982 and again from 1990-1997.

Ringside Report sends our condolences to Vin Scully’s family during their time of grief.