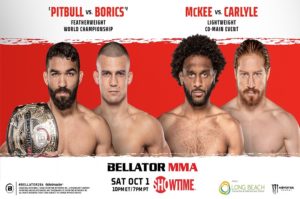 The main card of BELLATOR 286: Pitbull vs. Borics will air LIVE on SHOWTIME at 10:00 pm EST, while the preliminary portion of the event will air free-to-watch beginning at 7:00 PM ET on the BELLATOR MMA YouTube channel, the SHOWTIME Sports YouTube channel, and Pluto TV. A bantamweight tilt featuring undefeated former LFA champion Richard Palencia (10-0) versus Cee Jay Hamilton (15-9) is confirmed for the undercard.

Tickets for the massive event in Southern California will go on sale Friday, August 12 with a special presale the day prior, and can be purchased Bellator.com and Ticketmaster.com.

Reigning BELLATOR featherweight champion, pound-for-pound kingpin, and MMA living legend Patricio ‘Pitbull’ returns to the BELLATOR cage for the first time since reclaiming his title from nemesis AJ McKee by unanimous decision in their BELLATOR 277 rematch. For the first defense of his third championship reign, Pitbull will face the red-hot #2-ranked contender, Hungary’s Adam Borics in the main event of BELLATOR’s return to Long Beach, California. Pitbull, 35, has been one of the faces of BELLATOR for well over a decade. The Brazilian finisher became just the second BELLATOR fighter to simultaneously hold two titles when he knocked out then-lightweight champion Michael Chandler in the first round of their 2019 meeting, and his resume is as lengthy and renowned as anyone’s in MMA, regardless of promotion. The winner of eight of his last ten, Pitbull has continued to display his dominance into his mid-30s. Against Borics, Pitbull will look to begin yet another successful era as the top dog at 145-pounds.

29-year-old Hungarian Adam Borics has been as impressive as advertised when he signed with BELLATOR in 2017 as one of Europe’s brightest young talents. “The Kid” has been nearly perfect inside the BELLATOR cage, amassing five straight finishes in as many outings to start his tenure with the promotion, building a highlight reel with wins over former champion Pat Curran, Aaron Pico, Jeremy Kennedy and Mads Burnell. Currently riding a four-fight winning streak, his successes and marked improvements in each subsequent bout have seen Borics catapult into the upper echelon of the featherweight division, landing at his current perch as the division’s #2-ranked contender. The fight with ‘Pitbull’ will be the biggest of the Kill Cliff FC product’s career, but if his recent performances are any indication, Borics is ready for his bid at BELLATOR championship gold.

While ‘Pitbull’ faces a new challenger in the main event of BELLATOR’s return to Long Beach, a familiar face in California-based star AJ “The Mercenary” McKee will look to make a strong first impression in the lightweight division in the show’s co-main event. In his consequential lightweight debut, McKee, 27, moves up a weight class to face a tough opponent in arguably the toughest division in BELLATOR’s current landscape. The former champion is eager to rebound from his first career loss, as well as to announce his arrival at 155 pounds to the rest of the division. With his new weight class ruled by the brother of Patricio ‘Pitbull,’ Patricky, McKee has a clear target at which his efforts will be aimed north of featherweight. First, he will have to dispatch a difficult opponent in Carlyle, who is 1-0 in his BELLATOR tenure, with an even more recent victory in Japanese-based promotion RIZIN’s ring this past April.

Spike “The Alpha Ginger” Carlyle, at 29-years-old, is eager to give former featherweight champion AJ McKee a warm welcome to the 155 lb. division in front of “The Mercenary’s” hometown of Long Beach. Carlyle is on a roll, having won five straight fights with a whopping five finishes during that span. Of course, this current stretch includes Carlyle’s wild, comeback submission victory over Dan Moret in the third round of their BELLATOR 272 affair. Against McKee, Carlyle finds himself in a sizable matchup for both the division and combat sports fans. A win over the former titleholder would be the biggest of his professional career and likely vault him into the division’s rankings.
# # #