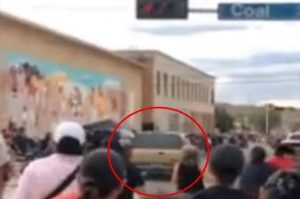 No one was killed; however fifteen people were injured, when two alleged Fast n Furious Fellows raced their SUV into an Indigenous Parade yesterday in the quiet town of Gallop, New Mexico.

The two vehicle occupants are in custody.

Children were the first to see the truck barreling towards them. Everyone scattered. Hearing THAT; RIGHT THERE, caught in my throat. NOT ON OUR WATCH, I’m thinking. Then, I remembered. We are a nation of laws and these folks are innocent until it is proven beyond the shadow of a doubt, that they are guilty. Then, we’ll “all pile on the rabbit” as Bug’s says. Until then. I’ll remain hopeful and optimistic.

The Navajo Nation President, Jonathan Nez and his family, were walking in the parade, which had just begun 15 minutes prior.

First and foremost, I hope what happened was as innocent as their having lost control of the vehicle. I don’t know what happened, so until we’re clear what this was, I’ll be holding back on what my Spidey Sense tells me this was. Side eye spoken here!

The fact that they were immediately placed into police custody instead of coming out saying: “Hey, Wait! We’re so sorry. We lost control of the vehicle. It was unintentional.”, speaks volumes.
I lost my breaks while making a right turn onto a highway with a “Yield” and “Merge” , while not being able to do either, on a steep, tight curving incline. If that was the case with these two people, O.K. We completely have compassion.

If it was a Boomer, (yes, I’m one and I will be the first to surrender my motorcycle and car keys, if and when the time comes) but if it was, then I return to my soapbox where I’ve been shouting that people should have to retest every so often, for every and anything they do. Work those chops. If you know what you’re doing and you’re lucid, you should have no problem.

We’ll see what happens. I truly hope was an accident or a misunderstanding. If it was not, Biden needs to get his belt out n toughen up our laws against the crazy that is attempting to remain the norm.

This is a developing story which you are most welcome to jump on in and post updates about for all to read.