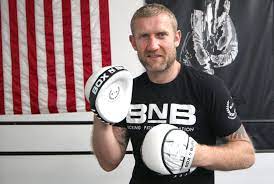 In the UK, the Olympics has been the conveyer belt for future professional stars over the last few Olympic cycles. The amateur code has provided us with some truly exceptional boxers who have gone on to become distinguished world level champions or contenders. There are a few, however who have gone to the Olympics, done well enough, even to medal, but found the professional game to be a matrix they have been unable to master. Or that their physical frailties, or years of putting them through being an elite athlete has physically caught them up.

Whatever the reason as to why former Olympians have not made it in the professional game, they are all worthy of praise for even getting to the premium amateur sporting event. In Beijing in 2008, Tony Jeffries 9-0-1, 6 KOs, managed to get himself a bronze medal at light heavyweight. Professionally, once he turned over, things did not go to plan and hand injuries forced a stoppage to his professional boxing career.

His amateur career was pretty remarkable. Brought up in the northeast of England, an area of great deprivation but tremendous spirit, Jeffries began boxing at age 10. His youthful career took in over 90 fights and notably he represented England/Great Britain over 50 times. His uncle William Young “Billy” Price had been a professional boxer, so he was hardly needing to look outside his own family for inspiration to get himself into the ring.

There were early wins in the amateurs for Jeffries as he won the schoolboy championships in 1999, the European Cadets under 17s and the YMCA international cup in new Delhi, India. Not quite getting to the finals of Junior Brandenburg Cup or the Junior Championships in 2003, held in Warsaw that year, was hardly going to hold him back as he found himself in 2005, in the final of the Commonwealth Championships. He was more than a handy boxer and went on to the Commonwealth Games in 2006, losing to the eventual winner, Scot Kenny Anderson in the quarter finals, after which he was forced to have hand surgery – the writing was perhaps on the wall.

That year he was also a finalist in three prestigious international events before in 2008, he represented Team GB at Beijing in the Olympics.

Jeffries was notable because he was the first boxer from his area to represent his country at the Olympics. In the semi-final he lost to the Irish boxer, Kenny Egan. He is a proud man and proud of his heritage, so much so, that he presented his bronze medal to the people of Sunderland at their football stadium, the Stadium of Light. His other great passion is football, and it is believed that during an interval in one of the home games of Sunderland FC he signed his first professional contract!

Signing to Kelly Maloney, still Frank at the time, he made his debut on the 27th of February 2009 by knocking out Aliaksandr Vaiavoda in the 1st round in Barnsley!

Over the next three years he was to fight professionally another 9 times. He never lost but drew once in bizarre fashion. On the 23rd of July 2010, in Houghton-le-Spring he took on Michael Banbula. Jeffries and his team were ready and prepared for a 6-round fight. At the end of the 6th round, ahead on points he was told it was an 8 rounder! He lost the next 2 rounds and ended up drawing the fight! At least he heard the final bell. Who knows who was to blame for the mix up, but it left him without a perfect professional record!

But the hand injuries were clearly getting worse. On the 23rd of September 2012, he took to social media to announce his retirement. By that time, he and his family had already made the move to Santa Monica, so the next chapter was never going to be in a UK context.

The final chapter in a professional ring happened on the 3rd of September a year earlier, 2011 when in Doncaster he beat Paul Morby on points over 8 rounds he knew about!
Once permanently out of the ring, Jeffries was, in his own words, lost. He needed purpose and having boxed and fought since being a young boy, he lost all the structure and sense of himself. And so, he threw himself into business. Jeffries now owns and works at the Box ’n’ Burn gym with friend, and personal trainer, Kevan Watson in Santa Monica. Jeffries speaks of how he stumbled into this as a career pathway but once he fell into it, he has never looked back.

Jeffries invested all he had in the business and this award-winning venture has done much more than sustain him and his family financially. There is now the academy, a world leader in the promotion of fitness through boxing. He is also a very successful podcaster and the sounds of a very northeast Sunderland accent spilling out into your ears around the guests he has being from the USA is a part of the appeal of listening. It may be incongruous but in a very marvelous manner.

Jeffries has gone from a guy who boxed cleverly in the ring who learnt quickly how to box equally cleverly outside of it.