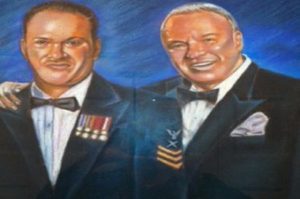 Photo copyrighted by The Berkwitt Family

“I detest bad manners. If people are polite, I am. They shouldn’t try to get away with not being polite to me.”— Francis Albert Sinatra

It’s been 24 years since the passing of Music Icon Francis Albert Sinatra at the age of 82. As an avid fan who grew up to the sounds and stories of Sinatra from my late Father, Alvin Berkwitt, who collected his albums, worked rooms that he played at the Fountainbleau Hotel on Miami Beach, and watched all of his movies, but I didn’t learn to really appreciate what Frank did until I was much older. It would hit me on my 22nd year on Planet Earth back in 1990, while stationed in Italy, and it hit me like a ton of bricks.

Never has one artist been so recognizable by a body of songs, recorded over a span of almost 70 years. Whether its unrequited love in the Columbia Version of “I’m A Fool To Want You,” or maybe one of his finest vocal recordings on his 1957 album “Come Fly With Me” of “April In Paris,” which takes you to the wonderful city as Sinatra belts out the tune. Or maybe the “Summer Wind” came blowing into your town to his cover of that song. How about a reflection on your own life in: “It Was a Very Good Year?” I know as I have listened to this song, I can relate at each point from 17 to 21 to 35 for sure, and it’s been many good years.

Would any New York professional sporting event be an event without Frank in the background belting out “Start spreading the news, I am leaving today, I want to be a part of it, New York, New York?” Or maybe his tome song “My Way.” I actually had them play this song on a video made for my retirement from the Navy in 2006. Yes, Francis Albert Sinatra did it his way! It was almost like the song was written verbatim for Sinatra when you hear:

And now, the end is here
And so I face the final curtain
My Friend I’ll say it clear
I’ll state my case of which I am certain
I’ve lived a life that’s full. I have traveled each and every highway
And more, much more than this, I did it my way

How many of us have played this song in our homes, cars or in poignant times in our lives? I certainly have.

On two occasions I saw Frank in concert. Once with my dad back in 1978, at the Sunrise Musical Theater in Fort Lauderdale, Florida, and again with my dear friend Beverly Corso in August of 1994 at the Merriweather Post Pavilion in Maryland. Sadly, as Frank is now gone, so are my Dad and Beverly. During the 78 concert, I remember a then, 62 year old Sinatra in great voice and spirits. In 1994, Frank, then 78, was of course not the same in voice, but I have always said, 40% of the Sinatra voice is 100% better than most voices today.

There is one thing that was undeniable. At the second concert, since I was much older now and could really take in a Sinatra event, was the crowd didn’t care if Frank could not hit all the high notes or remember all the words. They loved him and came to see a man in his final months of performing which we found out later for sure when he performed his last full concert on stage in December 1994 in Japan. There would be one more appearance in February of 1995, at the Frank Sinatra Golf Tournament in Palm Springs where he sang a few songs, but not an entire concert. At the 94’ concert, fans shared Sinatra memories over the years and could be heard throughout the venue laughing and talking. When Frank hit the stage shortly after the crowd heard: “Ladies and Gentlemen, Frank Sinatra,” …the applause was deafening. Women still swooned, and guys snapped their fingers and thumped their feet to the sounds of Sinatra.

Sinatra received a Lifetime Achievement Award from the NAACP in 1987 for his movement and dedication to the Civil Rights cause. Never one to shy away from a fight, he told Las Vegas years before that if Sammy Davis, JR., could not stay in the hotels he played at, then they didn’t need his services. That ended the ridiculous racial bigotry because the hotels and casinos knew a Sinatra appearance meant a huge cash flow for them and that he meant it.

But the media for years, would rather tell you Sinatra was in the Mafia and other negative slants to tarnish his name. He was a man that raised countless millions of dollars for charity. Many times, he stepped up with a check for a person in another state that he heard about on the TV that lost a home in a fire or other event. When Screen Legend, Bela Lugosi, famous for playing Dracula passed away penniless in the 1950’s, Sinatra very quietly picked up the funeral expenses and wanted no publicity for it. These are only a few of the stories of his humanity towards his fellow man. Sinatra’s long lasting legacy of course is his music and movies, but never forget what this man did for his fellow man and for causes he strongly believed in during his years on Planet Earth because in a world today without him, which sadly has changed, it’s nice if only for a moment, to know that someone like Francis Albert Sinatra gave of himself to make this world a better place.

24 years later, I still miss you Francis. You were, are and always will be, a huge part of my life thanks to my dad and Uncle Stan…