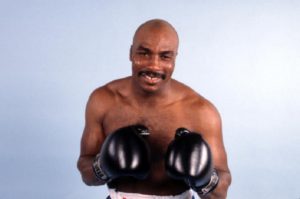 “He was a good man. Write something nice about him”

Advice given to Thomas Hauser after Earnie Shavers passed away and reported in Boxing News, September 8th, 2022.

The following from a conversation with George Foreman on the Letterman show, when George was asked to name the hardest punchers he faced in the ring, Letterman pursued some clarity,
“Letterman: What about Earnie Shavers?

Doing anything which covers the career of such a phenomenal man, is quite simply, impossible. Any career can be categorized by events, statistics and images, but the man who most claim was the best fighter never to become a world champion is so much more than any headline; especially one which highlights a failure.

Let’s begin with his name. It was Earnie Shaver and not Shavers. He became increasingly frustrated at it being mispronounced until he realized it was futile and, apparently, just accepted it! But there is little else steeped in mythology about this titan of the ring.

He was born in Garland Alabama on the 31st of August 1944. Just as the Second World War was due to end, this iconic acorn – as described by Muhammad Ali – was about to make his presence known at home, within his community and then, over time, on the biggest of sporting world stages. His record, as a professional athlete, reads like the reverse record of a journeyman. He fought 89 times but unlike a journeyman, won the vast majority of them – 74. It’s an unbelievable record, especially when you consider that 68 wins were by way of knockout!

The hardest puncher ever to don a glove? Many thinks so.

So, how do you sum up that career? You don’t. Summaries do not bring justice along with it to the Shavers’ table! And so, let me give you some of the highlights along the way and encourage you to do more – hunt down how others saw him or just find his fights – and I shall recommend one later on… for if you want to know more than I have written – go searching. Read the memories of the people who met him and seek out – wherever you can find them – the fights. Words are great, but the actual evidence upon which they are based – speak volumes more.

Twice Shavers fought for a world title in a vast career spanning from 1969 until his retirement in 1995. In 1977 he faced Ali, and in 1979, it was Larry Holmes. Both were close affairs. At one point as he hurt Ali in the 2nd round of his fight and then put Holmes to the canvas in the 7th round of his second attempt.

He came into the professional ranks after a short amateur career which included winning the National AAU heavyweight title in 1969. His progress in the pro game was not always smooth and in his first 47 fights, he lost 3. But back then losses were educational more than disasters.

But then he met, Don King.

Two icons and an iconic venue – Madison Square Gardens, 29th September 1979. It was here Ali gave him the nickname of “The Acorn” because of his bald head. Shavers had fought 60 times already! Over 15 rounds and the aftermath much was made of Ali. Shavers fought hard and worked it hard, but he was unable to beat The Greatest, though he hurt him bad. Ali remarked afterwards just how hard he had been hit, “Earnie hit me so hard, it shook my kinfolk back in Africa”. But the result was that Shavers had now lost for the 6th time in a 61 fight record.

He was far from finished.

It became quite the ride as he faced Larry Holmes at Caesar’s Palace for the vacant WBC heavyweight crown on the 25th of March 1978. Holmes won on points. Then Shavers went on to knock out Ken Norton! On the 29th of September 1979 he was in Caesar’s Palace, Las Vegas, facing Holmes again and after knocking Holmes to the canvas in the 7th round in a blow described by Holmes as the hardest punch, he had every taken in his career, the referee was forced to stop the fight in the 11th with Holmes repeating his earlier win.

All of those fights were likely to hold Shavers in high regard in the US. In the UK, it was in 1982, Shavers faced a British heavyweight fighter who, like Shavers at the time was on the comeback trail. It was in May 1982, Joe Bugner appeared in the ring opposite Shavers in Dallas. Bugner was 32, Shavers was 36. For British boxing correspondent, Steve Bunce, the fight between the two Is “one of the most overlooked fights in the eighties.” In his Big Fat Book of Boxing, Buncey talks of how both were boldly predicting that this fight would see them back into world level fights. When Shavers hit the canvas in the first round, things looked ominous, but he rose. He then caught Bugner and Bugner was forced to hang on until the bell. It was not going to last much longer. In the second, a clash of heads led to a cut over Bugner’s left eye and the fight was waived off. It delivered neither of them what they were after, but it gave the fans a taste of what it was like when Bugner was in control of his jab and Shavers was effectively waving a right hand that was the envy of the whole heavyweight division. It was a reminder rather than a precursor for what was to come and so Shavers was in the endgame of his career.

He was not going willingly and having had retina eye surgery before his fight with Randall “Tex” Cobb in 1980, retired in 1987 and then again in 1995.

After his retiral, the man who had a quip for almost every occasion became a preacher and used his eloquence to inspire others. From the views of legends of the game like Angelo Dundee to Ali, Foreman, Holmes and the many others with whom he shared a ring, Earnie Shavers was a true gentleman. Dressed impeccably, his manners in check and the love of the game part of who he was and what he gave, his legacy was manyfold. There is a story that during the rehearsals for Rocky III Sly Stallone thought it would be good to invite Shavers in to spar with him. Ever the gent, Shavers initially refused to do anything more than use a soft jab. Stallone asked for “something real.” So, Shavers hit him. Near the liver. The sparring session ended with Stallone in the men’s room throwing up. Shavers never lost that power but the man who once said that he was so embarrassed after a defeat that in the dressing room, even his shadow was hiding, used that level of poetry keeping doors as a “meeter and greeter” in the UK – where he moved to for a while – and when he was a trouble shooting referee in professional wrestling.

The stage was always open to a bit of Shavers magic, and though I never had the privilege of meeting the man, you can not be but struck by the effect and the warmth that comes from those who did. And so, we return to where I began – what the man did. 89 fights, 68 professional boxers stopped by his hands and 78 years on this planet as one of the greatest heavyweights to grace a ring in an era when there were so many from which to choose. In one obituary, that twin approach to life was best illustrated by Randy Gordon, the former New York State athletic commissioner, who said Shavers always had time for the fans, whether it was signing autographs or exchanging a word or two. “He was one of the nicest guys in the world, until he got into the ring and tried to take your head off,” Gordon added.