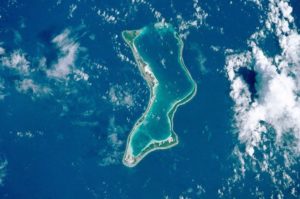 I reckon that we are getting better at behaving in a gawsie manner, unlike our ancestors. Though they managed the portly part of that definition, they did not get to manage the dignified pairt o it!

A few years ago, I reviewed a play at the Edinburgh Festival Fringe called, Chagos 1971. It was performed by a group of student actors and though worthy, was not the highlight of my day. But it did do something for which I am extremely grateful to the students – raised my awareness of a disgraceful period of UK and US relations which are a cultural and moral stain on both of our nations.

The Chagos Islands, a small atoll of about 500 islands just off the coast of Mauritius in the Indian Ocean. Upon the main island sits an American base, allowed to be there by the Imperial masters of the islands – the United Kingdom.

Together, we have lied, cheated and behaved utterly with moral contempt over this small group of islands and there are descendants of the people as well as the original inhabitants who deserve far better. The Chagos Islands were once inhabited by a people who spoke Bourbonnais-Creole, showing their clear heritage and from 1967 until 1973, using a mixture, apparently, of half truths and lies, the British Government had them moved. It was a different time, of course, of the Cold War and a new dash in Africa – for influence more than territory. We saw the Communist versus Democracy battle played out with British support in Rhodesia and South Africa whilst communist insurgents and Freedom Fighting Movements had support from the Soviets throughout the continent, attempting to bring Marxism to the people.

In our own ways, both failed.

The United Nations have already ruled that the islands were part of the British Empire and should be given to Mauritius. Given.

The United Kingdom, who call the Chagos Islands, the British Indian Ocean Territory, assert their right to the sovereignty to these islands which are 5,000 miles away. 5,000 miles.
In the 1970’s both the UK and the US forcibly removed the islanders to make way for that US strategic military base. It remains on these islands. In fairness, the UK has agreed that they would hand the islands to Mauritius, once they were no longer of strategic importance. They furthermore claim that Mauritius has never had sovereignty over a group of islands on their doorstep whilst the UK have held continuous sovereignty since 1814. It is the same logic that could be applied top many countries, formerly of the Empire…

Of course, the Mauritians, never held sovereignty. Mauritius was a French colony itself and the treaty in 1814 was signed by the French, not the Mauritians! It saw Mauritius itself be given to the British.

By the time they were being given strategic significance in the world by their colonial masters, it was a time of great liberty from the yoke of colonialism for the rest of the continent. Former colonies were being given their independence and Mauritius, which had been given to the UK by France in that 1814 treaty, got theirs in the late 1960’s or at least they were given a section of it – these islands became renamed, then forcibly abandoned, and then a military base stationed there.

Of course, I can only guess and imagine the strategic significance of the atolls. Just what these islands give to world peace can be but imagined. I am no expert on global security.
As a humanitarian, however, I think we can all agree that we have become acutely aware of just how appalling it is that we seem to be immune to some of the behavors of our ancestors because it gives us palpitations when considering doing the right thing. But we must.

The campaign to have these islands given back to the people who, 50 years ago, were unceremoniously turfed out of their homes “temporarily” is ongoing. They should have their homes returned. The future of their homeland should be in the hands of those who are attached to it and not to some long forgotten imperialist past which requires to be binned.

We should act with courage and with dignity. Something as we know some of our ancestors lacked in when dealing with the other nations. Aye time tae be gawsie…

Gawsie is used to describe people and their features in a positive way: “Of persons: plump, fresh-complexioned and jovial-looking; handsome, of stately or imposing appearance, portly”. Portly originally meant: “Characterized by stateliness or dignity of bearing, appearance, or manner; handsome, majestic, imposing.

Gawsie first appears in the eighteenth century poet Allan Ramsay’s The Tea-Table Miscellany of 1724: “Nelly’s gawsy, saft, and gay, Fresh as the lucken flowers in May.” Burns also uses it to describe Luath the collie, one of the dogs in his poem Twa Dogs from 1786: “His gawsie tail, wi’ upward curl, Hung owre his hurdies wi’ a swirl.”

Thanks to the Scots Language Dictionary online…