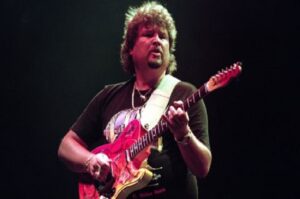 Musician Jeff Cook, co-founder of the country band Alabama, passed away November 7, 2022, at his home in Destin, Florida. While his exact cause of death is unknown, Cook battled Parkinson’s disease, having been diagnosed in 2012. He was 73.

In 1972, Cook co-founded the band Wildcountry, with his cousins Randy Owen and Teddy Gentry, and in 1977 the band’s name was changed to Alabama. The band’s biggest success was during the 1980s, having over 27 number one hits and producing seven multi-platinum albums. Their collection of singles includes “Tennessee River”, “Love in the First Degree”, “Mountain Music”, “Dixieland Delight”, “All American Woman”, “Angels Among Us” and “Song of the South”.

After Alabama disbanded, Cook found success as a solo artist, producing ten studio albums and he was inducted into the Musicians Hall of Fame and Museum in 2019.

Ringside Report sends our condolences to Jeff Cook’s family during their time of grief.