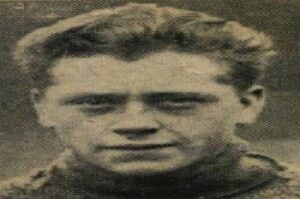 This time round I want to go back, way back. To a time when life seems almost inconceivable. The beginning of the century…

Scotland at the turn and dawn of the twentieth century was no different to most busy and industrialized parts of the world. It would have its areas of what we now call deprivation, though at the time they would simply be known as home. In overcrowded housing people would literally be cheek by jowl with neighbors and births would be commonly celebrated, but not universally as another mouth to feed would stretch the budget – often way beyond breaking point.

Some can get quite misty eyed about the past – times when things were right, and people were decent. In the early part of the twentieth century there was nothing decent about the conditions in which the working class were forced to live. Nothing.

And so, towards the latter part of September one George McKenzie was to be born, no doubt parents delighted to see him and worried about how they would continue to survive.

Given the early date of his birth and the lack of records around for us to plunder – there was no Boxrec, though they have done their best – the number of fights this future Olympian had is in dispute. Boxrec has it at 14—2, 7 KOs, whilst Boxing History has 45 contests registered with 36 wins, 7 losses and 2 draws.

What is not in dispute by either is that his life was short. He died in 1941, aged 40. Given that this is early in the Second World War, I cannot find evidence of the reasons for his death, though I know it wasn’t in the ring. He had hung up his gloves in 1929. A reasonable guess might be in the service of his country.

George tuned professional after winning a bronze medal for Great Britain in the 1920 Antwerp, Belgian Olympics in the bantamweight division. Mrs. McKenzie would have been proud that the first of two Olympic medals were to adorn her mantelpiece at home – George’s brother James went one better in the 1924 Paris Olympics! They remain the only Scottish brothers to have won Olympic medals and they fought out of the same amateur gym – Leith AAC. The club, believed to be the oldest club still in existence in Scotland was founded in 1919, by Leith dock workers alongside the Scottish flyweight, Tancy Lee who was the first Scottish fighter to win a Lonsdale Belt! It went on to boast varied careers within the sport, including world champions such as flyweight Johnny Hill and super-featherweight, Alex Arthur as well as George Smith, who refereed Muhammad Ali v Henry Cooper in 1966, who was a former flyweight in the 1920s!
George went to the Olympics as the British Amateur Boxing Association (ABA) champion of 1920. Following his round 16 bye, he then progressed to face John Koss of Norway in the quarter final before losing to the South African Clarence Walker in the semifinal. Walker, whose paternal grandfather was from Scotland went on to win the gold so we, as a nation, can claim a hand on two of the three medals… can’t we?

Nowadays a loss in the Olympic semi-final is a guarantee of a bronze medal but back then you had to fight again for it. What was most daunting was the prospect of facing a Belgian national in the bronze medal fight – Henri Hebrants – at their home Olympiad. Clearly George managed to get through that and emerged with bronze round his neck.

In November 1920, the 29th, he made his professional debut, winning a 10-round fight against Arthur Ireland on points in Covent Garden, London., though Boxrec suggest it was not until the 12th of January 1922 in Liverpool where he stopped Young Alsop in the 3rd round. According to Boxing History that was his 7th professional fight.

What both can agree on is the championship fights he fought. On the 16th of April 1923, at Waverley Market, Edinburgh he was stopped by Mick Adam in the 17th round of 20, in front of 10,000 spectators, taking a purse of £500 but not the Scottish featherweight title.

He got his hands on the Scottish featherweight title on the 23rd of February 1924, at the Caird Hall in Dundee when he beat Deaf Burke on points over 20 rounds. Next was his search for the British featherweight title and it took three successful fights to get it. Two were eliminators and on the 7th of April 1924 he was in Covent Garden beating Phil Bond over 10 rounds on points, then he beat Billy Palmer in the same venue on the 28th of April in the same year with a 15 round points decision. On the 2nd of June he faced Harry Leach for the vacant title and won a 10 round points win to become British champion.

On the 30th of March back in Covent Garden, Johnny Curley was to take the featherweight title in a 20 round points win before a rematch with Harry Leach on the 15th of December back in Covent Garden saw him win it again over 20 rounds. There were a couple of visits to South Africa for fights in 1925 – one draw and one lost before, in 1926 he faced Govan’s Willie McColl at Waverley gardens to win the Scottish lightweight title in an 18th round stoppage.

His final fight, according to Boxrec was on the 28th of January 1926, in Waterbury, USA where he lost to Bobby Garcia, but evidence exists of him fighting on until 1929 and his last reported fight was a 12 round points win against Tom Sayers in Edinburgh.

Now I have scratched the surface of a man who deserves a much better review than such a small piece of investigation can uncover. A fighter of the ‘20’s, of a century ago, an Olympian, a Scot and one of two brothers who made us very proud. Perhaps gone, but should never, ever be forgotten…