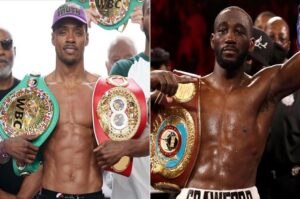 It’s no secret that professional boxing is known for drawing out the process of delivering the most competitive matchups possible. However, with a full year of boxing with no interruptions around the corner, will we get to see the fights we want?

There’s no denying that 2022 has been an excellent year for boxing, and as the year comes to an end, we have a chance to reflect on the fights we didn’t get to see and the fights we want to see in the new year.

Following a pandemic-filled 2020 and 2021, we can’t be too harsh on the promoters in boxing, but the puzzle pieces for countless elite-level fights have come together this year. There’s no hiding from the big fights now, as professional boxing is back to a full schedule, and fans hope a bigger, better, and more competitive 2023 will make this year look like child’s play.

Fights like Tyson Fury vs. Oleksandr Usyk are precisely what the sport needs. There’s no other matchup to make in the heavyweight division, and nobody cares about the alternatives. But will this unification bout surface? And what other bouts should we hope for in 2023? Let’s look at the most highly anticipated fights we believe should take place in 2023.

Two undefeated, experienced welterweights competing for a pound-for-pound greatest claim in an unpredictable bout? Yes, please. Crawford and Spence is a must and could be the most significant 147lb bout since Floyd Mayweather clashed with Manny Pacquiao in 2015. Which boxing gave to us about 3 years too late if you ask me. Both fighters were said to be past their prime when the fight took place.

Fans were hoping to close the year out with this bout, but recent talks surmounted to nothing, and a deal between the two teams has fallen through.

The logistics of making this fight happen are very complex. Crawford’s relationship with former Top Rank promoter Bob Arum has apparently been a thorn in the side of this potential bout. We won’t go into much detail because the fans don’t care about politics, but Crawford put the blame on Spence Jr and his team. We all know this fight needs to happen in 2023 if this division wants to retain any legitimacy.

Crawford puts the blame on Spence for their fight not happening this year 😳 pic.twitter.com/lfkQEgcJtN

The fastest puncher and the hardest hitter at lightweight are what we need. The good news is Ryan Garcia (23-0, 19 KOs) versus Gervonta Davis (27-0, 25 KOs) was made official this week, and the 136lb standouts are expected to clash in Las Vegas around April time.

Davis has expressed that he could fight in January, and a potential interim fight for Garcia could take place before his Spring meeting with Garcia. Let’s hope these senseless bouts don’t interfere with the boxing fight we all need to see in 2023.

Maryland’s favorite, Davis, tweeted that he’ll fight on Jan.7 in what’s expected to be a tune-up bout. Hector Luis Garcia, the scheduled opponent of Davis, won’t offer much, and the sportsbooks will reflect this in their pricing. However, using a BetMGM Maryland bonus code could significantly alter your odds in various markets, as the probability of Davis losing is very slim.

With that said, the bookies won’t be as confident when Ryan Garcia and Davis clash, and the winner of that contest, should go on to face Devin Haney in the summer (should he overcome Vasiliy Lomachenko). This would crown a lightweight king, and if anybody was going to claim a pound-for-pound greatest status, this is the path to take.

No more dancing around as to who the heavyweight king is; let’s unify these titles and ignore the other variables in the heavyweight division. If Fury and Usyk aren’t booked for 2023, boxing will become the farce many fans are already claiming it to be.

The promoters should take a page from UFC President Dana White’s book, as he proudly delivers MMA fights, the highest-level contests possible week-to-week, without the need to prance around the fights that fans want to see by entertaining several different titles.

Boxing fans have long waited for a single heavyweight champion, and Fury versus Usyk would deliver one. The undefeated Fury has looked untouchable for the past ten years, and Usyk is the only heavyweight that can match his skills. A deal hasn’t been discussed, but the public demand for this fight is the most prominent in all of boxing.

With a fire lit under him since a shocking loss to 175lb champ Dmitry Bivol this year, Canelo Alvarez will be looking to avenge this defeat; However, a second fight with Bivol could achieve this; a meeting with the unbeaten David Benavidez is more intriguing. Benavidez is an undefeated former champion whose style is more flamboyant and exciting matched to Alvarez’s weight class (168lb).