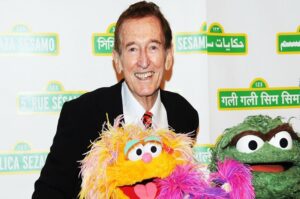 Actor Bob McGrath, who starred as Bob Johnson on SESAME STREET from its premiere in 1969 until 2016, passed away December 4, 2022, at his home surrounded by his family. The cause of death was not disclosed. He was 90.

McGrath has the distinction of being one of the longest-lasting human characters on the series since its debut; and with help from his iconic Sesame Street characters, he has been entertaining and educating generations of children for the past 50 years. McGrath appeared as his character Bob Johnson in several Sesame Street productions such as FOLLOW THAT BIRD (1985), ELMOPALOOZA (1998), THE ADVENTURES OF ELMO IN GROUCHLAND (1999) and SESAME STREET’S 50th ANNIVERSARY CELEBRATION (2019), among many others.

McGrath was also a well-known recording artist, releasing a series of successful albums of Irish and other folk songs and ballads sung in Japanese. Adding to his list of accomplishments, McGrath wrote many children’s books.

Ringside Report sends our condolences to Bob McGrath’s family during their time of grief.