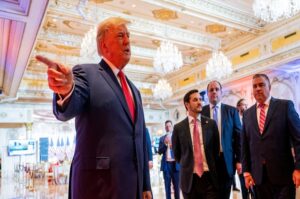 It looks like wannabe mobster Donald J. Trump is following in the steps of the OG gangster Al Capone.

On Tuesday the jury reached a verdict in the trial of the Trump Organization. After nearly a day and a half of deliberations, the final verdict in the Manhattan state courtroom has been declared guilty of several financial crimes.

The Trump Corporation and Trump Payroll Corporation were found guilty on all charges, including scheming to defraud and criminal tax fraud. Sentencing can be expected as early as January 2023. The former president was not charged himself in the case; however, the guilty verdict is the latest legal setback Donald Trump is currently facing in midst of his growing legal woes. Alan Futerfas, the attorney for the Trump Organization, stated that they plan to appeal the verdict.

Allen Weisselberg, who is currently on a paid leave of absence from the Trump Organization, pleaded guilty to multiple financial crimes in August. If he has proven to have complied with the terms of his plea agreement, Weisselberg will serve five months or less for what would have been a five- to 15-year sentence per the New York Law Journal’s report.

The terms of Weisselberg’s plea agreement required him to testify when called by the prosecution. Mr. Weisselberg told jurors he is now in the process of “repaying nearly $2 million in unpaid taxes and penalties for allegedly failing to report compensation including luxury vehicle leases, rent on his Riverside Boulevard apartment, furniture and electronics, and private school tuition for his grandchildren” per NYLJ’s reporting.

Manhattan District Attorney Alvin Bragg thanked prosecutors for their work on the case in a statement released on Tuesday. “This was a case about greed and cheating. In Manhattan, no corporation is above the law,” Bragg said. “For 13 years the Trump Corporation and the Trump Payroll Corporation got away with a scheme that awarded high-level executives with lavish perks and compensation while intentionally concealing the benefits from the taxing authorities to avoid paying taxes. Today’s verdict holds these Trump companies accountable for their long-running criminal scheme.”