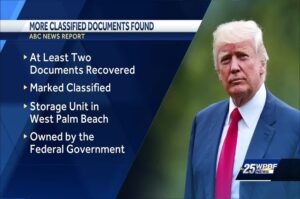 A breaking report from WPBF News indicates that the outside team former President Donald Trump hired to conduct a search for any government documents at four of his properties “have found at least two new items marked classified.”

According to ABC News, the documents were discovered in a storage unit in West Palm Beach, Florida. The unit is apparently owned by the federal government, and the Department of Justice has been notified of their presence. The push for the search came from a federal judge who told Trump’s lawyers to search for any other documents the former guy may have in his possession after the execution of a federal search warrant on Mar-a-Lago in August.

The four locations that were searched include Trump’s golf club in Bedminster, New Jersey; Trump Tower in New York; and one other location, per the Washington Post. A Trump spokesperson said that former “President Trump will keep fighting against the outrageous politicization of law enforcement and will always stand for America and all Americans.”

This is the latest revelation and I’m sure there’s more to be discovered. It’s crystal clear that Trump took classified documents and purposely keeps withholding them. @MerrickGarland it’s time to prepare the indictments.