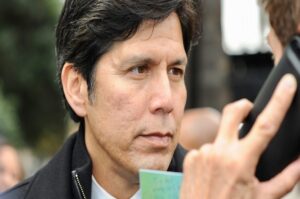 Business attire does not make one professional, character does.

As the Late Great and Beloved Maya Angelou stated: “When a person shows you who they are, believe them.”

Councilmember Kevin de Leon has been showing us who he is for quite awhile now.

The California Councilmember just re-entered the scene after a two-month hiatus following a leaked audio of he and a few other elected closet racists gossiping behind closed doors like the cowards they are, while discussing their colleagues using demeaning, derogatory and racist verbiage.

One resigned, the other was sent packing by voters. The third is this Piece of Trash, who states he has no intentions of leaving, despite his brutal words and actions.

He is; currently, the main spokesman representing the Spanish speaking community; which, as a polyglot who counts Castilian as my mother tongue, I’m not having it.

NO ONE deserves to be represented by such a stain. Folks come to America to better themselves, their lives, situations, as well as their families’ lives — given a great majority of whatever is earned returns to their Mother Lands to help feed and care for those left behind — struggling.

He certainly does NOT represent that vast and multi-cultural hard-working community whose epidermis hues range in all colors of the rainbow, HOW DARE HE DIMINISH THEIR REPUTATION!

His presence sparked outcry from We, The Sane, amidst some support from other racists who failed to realize or recall that when you conspire and entertain racism, the only logical reason would be that you are a racist. You lie with dogs; you get fleas and this guy is chock full of them.

Not 24 hours had passed between his two-month absence and the new presence before “Esse” (yes, I wrote that. He is no different than a street thug in a nice suit) was shown in a now-viral video, physically attacking a protestor exercising his First Amendment right at a charity event (donning a Santa Clause hat, mind you), in front of children and the rest of the world.

If you can’t take the heat, GTFO of the kitchen.

The protestor called him a racist and for that, the thin-skinned United States Representative attempted to end the constituents life.

These are the actions of a mad man and this is the garbage that needs to depart immediately from anything having to do with representation of our republic, the government and its people.
On our dime, he’s acting like himself. Even Chatter, the Chimp, behaved better. His actions do not bode well for ANY of us.

He is unfit for office, period. He lied and claimed that it was he who was attacked first.

Let’s go to the video tape, shall we? If you choose to watch, those aren’t the protestor’s brown hands hitting first, sorry. They are de Leon’s tiny “Peppa Pig” pink ones: pushing, shoving, knocking a man twice his size and weight down, and pummeling him like the déclassée trash that he is.

Gavin Newsome along with President Biden have called on de Leon to pack his dirty drawers and high tail it back to the slum of his mind, outside and away from the general public, although after what I saw, I believe he needs to be arrested, charged and face a jury of his peers trading his tailor-made threads for a cheap poly/cotton prison jump suit.

I hope to everything seen and unseen that the protestor sues his ass and wins every dime that phony bastard currently possesses. I was so disgusted with what I saw.

“Are you going to believe me or your lying eyes?” was a line quoted by The Late Richard Pryor in an old comedy, but there is nothing remotely humorous about the heinous actions of a sitting Councilmember who is paid by our tax dollars.

He, as well as all who behave as such, need to depart from holding public office.

Those who are just as guilty; given the harm they continue to cause to our democracy, and who need to have their tenure cut short before the New Year or sooner, for spreading the seeds which cause the domestic terrorism we witnessed in de Leon; further dividing our nation, include the following deplorable:

Whether it be through their words or their actions, these are a just a tiny amount of the Poisonous Projectors who must be dismissed from their elections, employment and from our democracy.