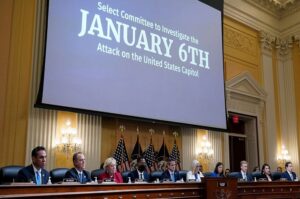 Almost two years later the first chapter into what took place on 1/6/2021 has come to an end.

The House committee charged with investigating the role Trump and his allies played during the Jan. 6th insurrection has referred the former president to the Department of Justice on four criminal charges. An executive summary of the committee’s final report was also released after being approved at Monday’s meeting. It will be made publicly available on Wednesday.

While the referrals do not mean indictments are going to happen, it is a largely symbolic move.
The charges referred by the panel include obstructing an official proceeding, defrauding the United States, making false statements and assisting or aiding an insurrection.

Furthermore, the committee recommended a formal ethics investigation of the role that House Minority Leader Kevin McCarthy (R-CA) and several allies — Reps. Jim Jordan (R-OH), Scott Perry (R-PA) and Andy Biggs (R-AZ) — had in the days before and on Jan. 6th. When asked his thoughts on the matter, Sen. Mitch McConnell (R-KY) said in a statement, “The entire nation knows who is responsible for that day. Beyond that, I don’t have any immediate observations.”

Committee Chairman Bennie Thompson (D-MS) said that he has “every confidence that the work of this committee will help provide a road map to justice, and that the agencies and institutions responsible for ensuring justice under the law will use the information we’ve provided to aid in their work.” The committee summed their work up perfectly: All roads lead to Donald Trump.