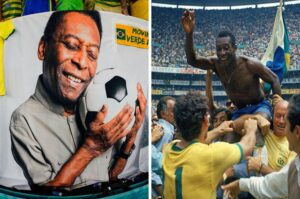 Pele, who was regarded as the greatest footballer ever, passed away December 29, 2022. No exact cause of death was given, though it was revealed in December 2022 that Pele was in palliative care at a Sao Paulo hospital, where he had been undergoing chemotherapy treatments for colon cancer, which he was diagnosed with in September, 2021. He was 82.

Pele, was born Edson Arantes do Nascimento on October 23, 1940. His father was a professional football (we know it as soccer in the US) player in their native Brazil. It was during his childhood that Pele began honing his craft. Pele began playing football as a career starting in 1956 until 1971. Within that time frame he won three FIFA World Cups in 1958, 1962 and 1970. He was credited for connecting the term “The Beautiful Game” with football. Pele’s exhilarating play and penchant for spectacular goals made him a star around the world.

Ringside Report sends our condolences to Pele’s family during their time of grief.