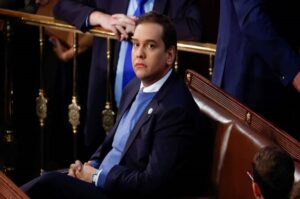 Tuesday morning was not a great one for Rep. George Santos (R-NY). The freshman congressman, who has been entangled with claims of fraud due to his embellishment of his resume, had an official complaint against him delivered to the House Ethics Committee by New York Democratic Reps. Ritchie Torres and Dan Goldman. The request is for an official investigation into a plethora of allegations including failure to file timely, accurate, and complete financial disclosure reports.

Santos is already facing an FEC complaint and the country of Brazil has filed extradition with the U.S. government for Santos to be brought back to the country to face charges for fraud. Other problems Santos is facing stem from his falsified educational, professional, and personal history — he lied so much that no one even knows if George Santos is his real name. Besides the lies of his background, Santos gave himself a $750,000 loan to his campaign — a violation of federal campaign laws — after making $50,000 every year prior to his run with him using GoFundMe to ask for help paying his rent.

Another lie exposing Santos that came to fruition on Tuesday is that his staffer allegedly presented himself as now Speaker Kevin McCarthy’s Chief of Staff to help Santos raise money from wealthy donors. During the 10th vote for speaker last week Santos threw up a white power symbol while voting for McCarthy. So much for being Jew-ish.

At the rate things are going, I predict we will see George Santos going through a lot of things. He’s arrived at the find out part of fucking around and I’m ready to see what else comes to light about him. Hopefully his constituents will demand his resignation and he can disappear into the void with Madison Cawthorn. A girl can dream, right?