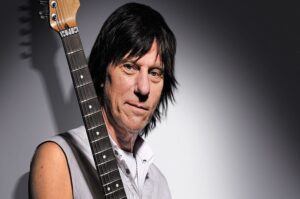 Legendary rock guitarist Jeff Beck passed away January 10, 2023, in East Sussex, England after he suddenly contracted bacterial meningitis. He was 78.

After news broke of Beck’s death, the tributes have been pouring in all over social media by iconic rock musicians such as Mick Jagger, Gene Simmons and Paul Stanley, who have all shared their memories and fondness of their dear friend. Actor Johnny Depp was a close friend and collaborator of Beck. Depp was by Beck’s bedside when he died.

Beck was born Geoffrey Arnold Beck on June 24, 1944, in Wallington, Surrey, England. From a young age Beck showed interest in the guitar and cited Les Paul as the first electric guitar player who impressed him. His skills and passion for guitar playing propelled him to great heights in the music industry, in a career spanning over 5 decades. He rose to prominence playing with the English rock band The Yardbirds, which formed in 1963. Afterwards, he fronted the Jeff Beck Group and Beck, Bogert & Appice.

Ringside Report sends our condolences to Jeff Beck’s family during their time of grief.