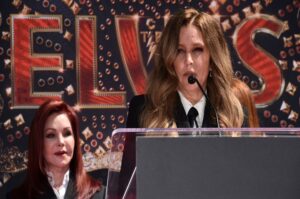 Lisa Marie Presley, singer-songwriter and daughter of Elvis and Priscilla Presley passed away January 12, 2023. Presley was found unresponsive after suffering cardiac arrest at her home in Calabasas, California. After paramedics performed CPR and were able to identify “signs of life”, she was rushed to a nearby hospital where she later died. Priscilla Presley released a statement announcing her daughter’s death. Lisa Marie was 54.

Lisa Marie’s last public appearance was at the 80th Annual Golden Globes on January 10, 2023, which she attended with her mother, Priscilla. They showed their support for actor Austin Butler, who portrayed the King of Rock and Roll in the film ELVIS. Butler went on to win the Globe for Best Actor for his performance.

Like her father, Lisa Marie had a music career as a singer-songwriter. On April 8, 2003, she released her debut album To Whom It May Concern. The album reached No. 5 on the Billboard 200 albums and was certified gold in June 2003. Her second album, Now What, was released on April 5, 2005, reaching No. 9 on the Billboard 200 albums chart. Her third album, Storm & Grace, was released on May 15, 2012. Presley also released non-album singles. Including duets with her father using tracks he had released before he died.

Ringside Report sends our condolences to Lisa Marie Presley’s family during their time of grief.