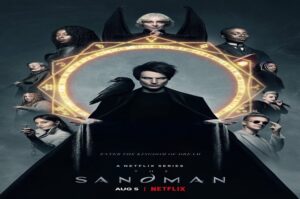 Morpheus, The King of Dreams, along with a plethora of mythological, biblical creatures and characters, come together in this smorgasbord of a story; originally a DC comic series, whereupon The King, being suddenly released from an almost century capture by a mere evil mortal, goes in search of that which was stolen from him long ago.

This dark world dramatic, sometimes horrific, sometimes comedic series transcends Heavens, Hells and everything in between making its way into a slow-burning, snailed pace fantasy, traveling through time and; sorry to say, in my view, wasting yours. It did put me to sleep better than night time cold remedy, that it did. Despite my dismay, it has been proven to quell the hunger of those who follow the series and for fans of this outer world super-hero, the reviews received by others, have been a trifle short of marvelous.

Rotten Tomatoes gave it an 87%.

I gave it a: find something else to watch, unless darker, slower than Batman burns, fit your groove.