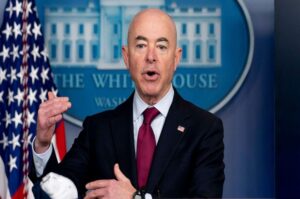 Now that the House GOP has barely chosen a speaker they are on to the next circus show. Senior House Republicans are quickly working on building an impeachment case against Homeland Security Secretary Mayorkas, the first Cabinet secretary they seem to be targeting. Impeachment proceedings for a Cabinet secretary are rare and the plan could ultimately result in backlash from moderate Republicans.

This comes as committees have just been assigned, and some are preparing to hold hearings regarding problems at the southern border, such as the influx in migrants and security concerns. The three House committees include Oversight, Homeland Security, and Judiciary. The House Judiciary Committee is the one that holds power over impeachment resolutions, and one top chairman has shown support of the motion. “If anybody is a prime candidate for impeachment in this town, it’s Mayorkas,” Rep. James Comer, chairman of the House Oversight Committee, told CNN.

As previously mentioned, it’s extremely rare for a Cabinet secretary to be impeached and has only happened once before. The last time was in 1876 when William Belknap, secretary of war, was impeached by the House but then acquitted by the Senate. Speaker McCarthy was pushing for Mayorkas to resign as he was trying to gain votes for speakership. Yet moderates seem to be hesitant to jump on board with this idea.

“Clearly, the management of the Southern border has been incompetent,” Rep. Dusty Johnson (R-SD) told CNN. “That is not the threshold in the Constitution for impeachment — it’s high crimes and misdemeanors. … I would want to think about the legal standard the Constitution has set out — and whether or not that’s been met.” But if the impeachment is brought up for a vote, they can’t lose more than four GOP votes or else the resolution will mark a huge failure for the already chaotic GOP House majority.

Republicans have made it very clear that they aren’t working for the American people. This upcoming legislative session will be nothing more than a revenge fest for the GOP who have made it their sworn duty to protect Donald Trump and themselves. I expect to see only impeachment hearings for the next two years and not a single piece of legislation that will actually solve any problems.