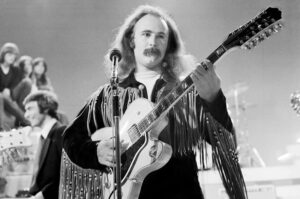 Singer-songwriter-guitarist David Crosby, a founding member of the bands Crosby, Stills & Nash, and The Byrds passed away January 19, 2023, in Los Angeles, California. A cause of death was not revealed. He was 81.

Crosby formed The Byrds in 1964, along with original members Roger McGuinn, Gene Clark, Michael Clarke, and Chris Hillman. The Byrds produced twelve studio albums between 1964 and 1973. Some of their most popular singles include “Turn! Turn! Turn!”, “Eight Miles High”, and “Mr. Tambourine Man”, among others.

Crosby left The Byrds and formed “Crosby, Stills & Nash in 1968 with Stephen Stills and Graham Nash. Neil Young came onboard as a fourth member, and the band became Crosby, Stills, Nash & Young. The band produced eight studio albums and released 19 singles including “Just a Song Before I Go”, “Teach Your Children”, “Our House”, “Long Time Gone”, “Woodstock” and “Suite: Judy Blue Eyes”.

Crosby was a member of two legendary and influential bands, who both left a lasting influence on American music and culture.

Ringside Report sends our condolences to David Crosby’s family during their time of grief.