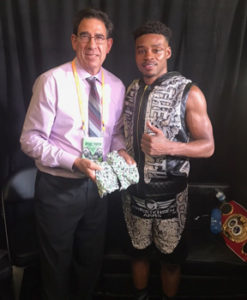 On September 28th, IBF welterweight champion Errol “The Truth” Spence Jr. earned a hard fought split decision over WBC champion “Showtime” Shawn Porter in an action-packed bout to unify 147-pound titles. The bout, which took place at the STAPLES Center in Los Angles, was an all-out battle and a leading contender for “Fight of the Year.” Following the bout, both warriors donated their hand wraps to the International Boxing Hall of Fame.

“The welterweight division has provided some of the most memorable and talked about championship bouts in history and on Saturday night Errol Spence Jr. and Shawn Porter added to the storied legacy of the 147-pound division with an incredible battle of heart, skill and will,” said Hall of Fame Executive Director Edward Brophy. “We are excited for fans to see the hand wraps from both of these champions in Canastota!”

Porter and Spence square off in “Fight of the Year” candidate

Unbeaten Spence (26-0, 21 KOs) of DeSoto, TX turned pro after representing the USA at the 2012 Olympic Games. He captured the IBF welterweight title in 2017 by defeating Kell Brook (KO 11) and has successfully defended four times. Spence has scored wins over Mikey Garcia, Lamont Peterson and Chris Algieri among others.

of hand wraps worn by Spence and Porter

In the co-featured bout, former 168-pound champion David Benavidez scored a hard fought 9th round stoppage of WBC champion Anthony Dirrell to reclaim the title and up his record to 22-0, 19 KOs. Benavidez kicked off training camp for this fight in Canastota during the 2019 Hall of Fame Weekend in June. Following the bout, both boxers graciously donated their hand wraps to the Hall.

The Spence Jr. vs Porter bout was promoted by Man Down Promotions, TGB Promotions and Shawn Porter Promotions and headlined an all-action card presented by Premier Boxing Champions. The card was televised live on PBC on FOX Sports Pay-Per-View.

A not-for-profit organization, the International Boxing Hall of Fame opened to the public in 1989 in Canastota, New York and is located at Exit 34 of the New York State Thruway. Hours of operation are Monday-Friday 9 a.m. to 5 p.m. and Saturday-Sunday 10 a.m. to 4 p.m.