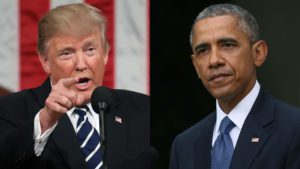 Hello, everybody. I am not a writer, but through my enjoyment of Brad Berkwitt’s Ringside Report, we have become cordial via the internet and in our far-ranging discussions he sensed my dislike and dismay for the man in the White House. Eventually, he (Mr. Berkwitt) asked me to become an occasional contributor and after some gentle arm- twisting I agreed.

First, though, I think I owe it to his readers to explain that about the only writing that I have done prior to this has been family and business letters and, of course, in high school and in college, and not really that much, as I was a business major. In any case, I hope his readers will forgive my errors and understand that I am a newbie at this, so your tolerance will be greatly appreciated.

In all fairness, I guess I should mention that my family is long time upper-Midwest and my people were actually there in the mid and late 1800s. I have never really been an overly political person, but I have tried to base my life on fairness and decency and even though I was formerly a Republican, I became more and more disturbed with not only the treatment of President Obama but the ludicrous and inane demands pouring forth from what today is I think referred to by many people as the Republican far right.

To begin with, some of you may remember the utter nonsense about Mr. Obama’s birthplace, which was Hawaii and that was confirmed to the absolute degree by the then-governor of that state. That should have been the end of it, but it wasn’t, with the “birthers,” in all their maddening vileness, refusing to accept the fact that the governor had verified that he had actually examined the certified copy of that document.

The next insult was the ridiculous assertion that Mr. Obama had not graduated from Harvard Law School. At that school he was the first African-American president of the Harvard Law Review. But the demands by certain less-than-savory individuals on the already-noted far right that he show them his transcripts was both ludicrous and moronic because the school confirmed that he graduated and his transcripts were none of their business.

Now, though, let’s put the shoe on the other foot. This man currently in the White House, a noted and known prevaricator (“liar” for those of you not familiar with that term) has made no few totally ludicrous and specious claims about an unending number of things, but the one that I feel needs to be examined is the same one that those of the right were demanding of Mr. Obama: Yes, it is possible that Mr. Trump did go to the University of Pennsylvania, but, given everything from his dislike of reading anything other than his bedside copy of “Mein Kampf” to his lack of verbal skills, I seriously question—to the point of absolute doubt—whether or not he graduated from that university, and, frankly, if it is like anything and everything else he failed to accomplish, I would, if I had the standing and the platform, call him on it and demand that he present proof—from the university—that he not only attended, but that he graduated, a feat which I seriously doubt he achieved.

Now as far as attending Wharton School of Finance and Commerce, which is the graduate business school at the University of Pennsylvania, I doubt seriously that he did and if any of Ringside Report readers has proof of his achieving the vaunted status of having received a Master’s Degree from Wharton, I formally request that he or she present same.

As I wrote at the beginning of this discussion, I am new to this, but hope and trust that the readers did enjoy the above and I hope to continue with what I think will be more thought-provoking material regarding this topic in the near future. Thank you for reading this far.