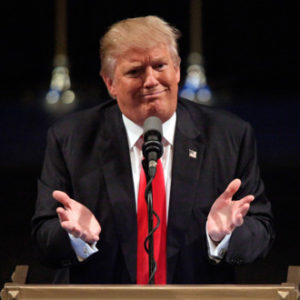 While I have, for the most part, attempted to avoid excoriating the liar, thief, thug and hoodlum who defames the White House every time he as much as gets near it, I can no longer try to even attempt neutrality. This latest disgusting and revelation regarding that totally unethical and completely corrupt SOB was and is “the straw that has broken the camel’s back.”

If you are not aware, he has been touting the anti-malarial drug Hydroxychloroquine as the be-all, do-all, end-all cure for the horror and curse which he—and he alone, nobody else but he, himself, through his indifference, uncaring, stupidity and overbearing belief that he knows everything, when in truth and fact that fat, disgusting low-grade thug knows less-than-nothing about anything and everything—brought upon this country.

Adding insult to injury, he then tried to claim that the drug would save everybody’s lives, but he conveniently, in the midst of his lying slop, left out two inconvenient facts:

2. He—Trump—owns an enormous amount of stock in the company that produces Hydroxychloroquine; funny how he never gave us that disclaimer while he was ballyhooing how wonderful the drug will be for Covid-19 sufferers and then ordered a government agency to buy 29 million doses of the drug from a company in which he has a major financial stake.

Please see and read the immediately below material and if you can even think about trying to stay neutral after this you are NOT “a better person than I,” but, rather, you are a far, far worse person, with as little grasp of what that disgusting excuse for a human being has done and is doing to this country. I urge you to read the below….and likely weep.

There are many topics that President Donald Trump returns to in his daily coronavirus task force briefings — ventilator stockpiles, hospital ships, governors who are flattening the curve — but few have been as vigorously endorsed as the anti-malaria drug hydroxychloroquine.

On Monday, Trump announced that his administration had ordered 29 million doses of the drug as a treatment option for the more than 387,000 Americans who have tested positive for the virus. His plan stems from a March 20 study out of the U.K., which found positive effects among COVID-19 patients who took a combination of hydroxychloroquine and the antibiotic azithromycin.

Although the study garnered international attention, many have since criticized the small sample size (26 people) and the fact that it was non-controlled (the patients were all at different hospitals).

In the absence of more evidence, however, Trump has continued to tout the anti-malaria drug, saying in a briefing over the weekend that he “may take it,” and that it’s both “powerful” and “profound.” In a Tuesday press conference, he cited a Democratic lawmaker in Michigan who believes the drug saved her life — and thanked Trump for pushing to make it available.

While the president’s confidence about the drug may be comforting, experts continue to urge caution when discussing its potential — among them, Anthony Fauci, MD, director of the National Institutes of Allergy and Infectious Diseases. “I think we’ve got to be careful that we don’t make that majestic leap to assume that this is a knockout drug,” Fauci said Friday on Fox News. “We still need to do the kinds of studies that definitively prove whether any intervention … is truly safe and effective.”

As the drug enters clinical trials in the U.S., many experts are speaking out about the need for more testing before conclusions are drawn. Christopher Plowe, PhD, a professor of global health at Duke University and a world-renowned expert on malaria drugs (including hydroxychloroquine), is one of them. Here, he helps fact-check some of the president’s recent declarations.

Fact: Hydroxychloroquine has side effects, one of which can be fatal

According to Plowe, who has been studying the drug for decades, Trump’s statements are misguided. “You can lose your life. That’s pretty clear. This is a drug that can cause serious side effects. The eye issues tend to be people who’ve taken it for a long time. But the really serious cardiac issues — the potentially fatal cardiac arrhythmias — those can occur the first time you take the drug,” Plowe tells Yahoo Lifestyle. “And it’s not just older people who have heart issues, who are at risk. It can even occur in people with normal hearts, so that’s a real concern.”

The most common side effects associated with hydroxychloroquine are headache, dizziness, nausea and vomiting, but cardiotoxicity — “medication-induced damage to the heart” — has been documented as a “rare but serious complication” of the drug. Z-packs, as Trump mentioned, have also been tied to deadly heart complications, also in rare cases.

In the press briefing on Tuesday, Trump said that healthcare workers are beginning to take the drug prior to getting sick. “They also say it’s good for the hospital workers to take them that it keeps it away, it keeps it out of your system,” Trump said. It’s a claim he also raised over the weekend: “They say taking [hydroxychloroquine] before the fact is good,” he said, adding that he “may take it.”

Fact: There are no studies showing that the drug prevents COVID-19

“I have not seen any such evidence,” says Plowe. “We use chloroquine for malaria prophylaxis, but … it’s just one pill a week basically.” Plowe explains that taking hydroxychloroquine as a preventative would require a completely different dosage and schedule. “Even if there was strong evidence — which we don’t have — even if there were strong evidence that it was beneficial at higher treatment doses until you have a randomized controlled trial with a prophylactic … I don’t even know what dose he would take if he was going to take it,” says Plowe. “I am not aware of any evidence about prevention or prophylactic doses for this indication.”

After sharing the story of the Democratic lawmaker in Michigan on Tuesday, Trump said there are “many stories” like that one and reiterated to Americans that the drug is working. “I’m not a doctor, I’m just saying we hear great results and some people say, let’s go to a laboratory. Let’s test it for a couple of years now,” Trump said. “We got people dying in this country and all over the world right now, not in a couple of years. There are people dying and I really think it’s a great thing to try just based on what I know.”

Fact: It’s too soon to know whether the drug can treat COVID-19

Plowe says it’s too early to make a call on whether or not the drug will work. “I think Dr. Fauci is right on target, that the only way we’re going to have confidence that would warrant recommending this is going to be a randomized controlled trial. And there’s a bunch of those in progress,” says Plowe. “There’s just so many ways that you can have a bias in [an uncontrolled] trial. Until you do the randomized controlled trial, you just don’t have the results.”

Much of the discussion surrounding the drug’s success has been anecdotal, but in Plowe’s experience, even that is unimpressive. “My son is the emergency room resident in a hospital in Brooklyn and he has seen people who have been taking hydroxychloroquine and Z-packs in the community and his anecdotal impression is that it’s making no difference whatsoever,” Plowe says. “And he’s seeing patients day in and day out. So that’s my anecdotal evidence that clinicians on the front lines — at least the one that I’m talking to — [are] not seeing any suggestion that this is making a difference.”

Again, ladies and gentlemen, PLEASE do not either accept as valid or put any faith or belief in anything the LIAR in the White House says.

Anything and everything he has ever done in his life has hurt, harmed and damage anybody who fell into his orbit and through his election he has been able to hurt, harm and damage this entire country. You are urged to pass this on to all and everybody you know.