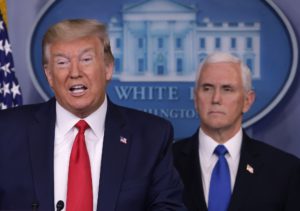 Last night I will made some brief remarks about  “60 Minutes’ program on CBS. However, before I do so I must commend the following to you, noting that, while I endorse this 1000%, it is not of my making, but, rather, was sent to me by my friend, “Uncle Chuck” and is making its way throughout the internet.

Before I put it in place, however, I now think, feel and believe that it is absolutely incumbent upon me to point out (because some people are still trying to defend that sleazy, slimy, degenerate lowlife of a president whose ONLY talent, other than that of grabbing women’s crotches, is LYING) that he is a consummate, absolute and total liar and the truth is that the man has no idea either of what the truth is or how to tell it. Please consider the following:

And an even more succinct timeline: 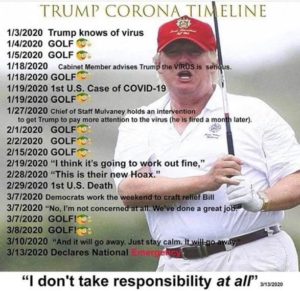 Now, the only problem with the above is that it actually “gives the lying scumbag a break.” Seriously. The dating is way, way, way off in terms of its total chronology and I now point out to you why:

Within one week of his anusness taking office in 2016, he was bluntly informed by staff that a pandemic was on the horizon. He did nothing.

Through that year, and in 2017 and in early 2018 he was apprised of it regularly. He did nothing EXCEPT, tiring of being kept informed, the SOB disbanded the Pandemic Task Force of the CDC. That act alone should now be grounds for impeachment and added to all the other evils which he single handedly either encourage, allowed or conspired in. Those numerous opportunities—and failures—to act are reason enough for that piece of feculent feces to be put in jail for the horror which he—yes, single-handedly–created for the American people.

In 2019 he was warned time and again, brushing the warnings off with his usual disinterest and his complete conviction that, as with the generals, the civil police, the intelligence community and everybody else, he knew more about everything than any of them did. (The terrible truth is that he is an ignorant LIAR, so self-centered and narcissistic that, in reality, he knows less about anything and everything that is going on in this world than people with a sixth-grade education.)

That vile pig, that self-centered slime, has never taken responsibility for anything in his life. Remember, folks, that his mentor was one of the lowest human beings on earth, a low-grade, lowlife degenerate by the name of Roy Cohn, whose attributes include his being a lover of another scum, J. Edgar Hoover, the gay gay-hater.

Ladies and gentlemen, I leave you with this one thought: Trump should be put in jail for non-mis- and malfeasance and I again state without fear of contradiction (other than from the morons who still want to blame the pandemic horror on “a Chinese—Democratic plot and who are still bringing up Hillary, Bill, Biden and George Soros, rather than focusing on what a piece of manure the guy in the White House is and on the harm he has done to America and the world) that he must, absolutely must, be voted out of office come November and when he refuses to leave, which (as Bill Maher clearly states) he will, claiming the election was “rigged” (the last election was “rigged,” but it was he and his thugs who rigged it) then the incoming President, hopefully Joe Biden, must order him arrested and removed from “the people’s house” forcibly and in chains if necessary.

I leave you, on this sacred holiday, with only good thoughts, good wishes and sincere hope that each and all of you will remain safe and remain well. Above all, you must vote in the next election and you must urge every person you know to do exactly that, but not for Donald Trump.