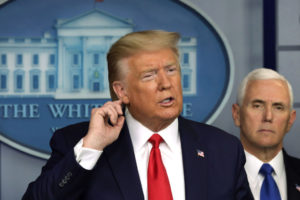 PLEASE take the time today to look at your legitimate news channels (essentially, anything other than Fox, which is anything but news) and become starkly aware that the Director of the C D C has now come out with the following warning:

Before you read the below from the CDC Director, however, several comments (from H S V):

You can not imagine the level of stupidity of people such as the FAR right wing whore of a governor (NO, NOT “harsh words,” but, rather, truth and facts) in South Dakota who refuses to protect her people and will not shut down anything, or the nitwit, numbskull, penis-brained governor and lieutenant-governor pair in Tex-ass, claiming that “it is better to die than to give up your liberty,” those idiots attempting (totally falsely) to compare the importance of the safety of shutdowns and personal distancing with the taking away of our freedom, ala naziism or communism, something people such as they, while denying that they believe totally in those concepts, are too stupid recognize in and as the difference between requiring people to stay safe in this horrific national emergency as opposed to simply allowing their citizens to run unfettered and put themselves in unlimited harm’s way, which, of course, will then put innumerable others at risk and in harm’s way from the Coronavirus. (Or in Trump’s case, the Moronavirus)

There is now no question that the FAR right wing liars and trash, from the orange haired orangutan in the White House down to morons who think that garbage such as fellow morons carrying signs that read “Liberate” and wearing Ku Klux Klan robes or nazi swastikas are (in President FF Von Clownstick’s words) “fine people.” They are not. They are nothing but lowlife and low grade scum, but the really disgusting part is that they are too stupid to admit that what they are doing is totally inimical to the rest of this country and its (our) safety.

Finally, before you begin the material from the Huffpost’s on-line article on Yahoo, know that the absolute worst of the hate-mongers are the degenerate LIARS of Fox, including Whoreah Ingram, Lardass Limbaugh, Spawn Hannity, and that lying swine Carlson, but because this is a family blog I can not use the alternative first name for him, although, believe me, it is almost the same with only one letter different.

The article begins below and as frightening as it is, the repugnant cretins of the FAR right will minimize it and mock it, and more is the pity.

“The director of the U.S. Centers for Disease Control and Prevention warned that a potential second wave of the novel coronavirus could be far more fatal than the current phase of the pandemic because it may overlap with the beginning of flu season this winter.

Government leaders at all levels must use the months ahead to prepare for such a resurgence even as some states announce plans to resurrect their economies, CDC Director Robert Redfield told The Washington Post in a wide-ranging interview published Tuesday.

“There’s a possibility that the assault of the virus on our nation next winter will actually be even more difficult than the one we just went through,” Redfield told the Post. “And when I’ve said this to others, they kind of put their head back, they don’t understand what I mean.”

The health official said the virus could be harsher in a second wave because having concurrent outbreaks of the flu and COVID-19, the disease caused by the novel coronavirus, would put immense pressure on the nation’s health care system. Both viruses cause respiratory symptoms and can require similar protective gear and medical equipment.

The first wave of COVID-19 that the world is currently experiencing has killed nearly 44,000 people and infected more than 816,000 so far in just the United States, according to coronavirus data compiled by Johns Hopkins University. The pandemic has overwhelmed hospitals, tanked the economy, shined a light on systemic inequities that lead to more exposure, and revealed massive shortages in testing kits, ventilators and personal protective equipment nationwide.

The CDC has detailed drastic but necessary guidelines for states to implement, such as stay-at-home orders and business closures, in order to help mitigate the spread of the virus. While most states followed through on those guidelines, some governors have already decided to reopen their economies as early as this week despite warnings from health experts that it might not be safe enough yet.

The planned reopenings come after small right-wing protests in several states called for the end of stay-at-home orders and after President Donald Trump posted a series of tweets calling to “LIBERATE” Michigan, Minnesota and Virginia from coronavirus safety orders ― a move Redfield told the Post was “not helpful.”

Redfield also said that government leaders must stress the need to continue social distancing as states lift stay-at-home orders, as well as exponentially scale up each state’s ability to identify infected residents through testing and then trace back others they’d come in contact with.

But Trump just this week dismissed bipartisan concerns about states not having adequate supplies, claiming that the U.S. was testing people “at a number nobody thought possible.”

“Not everybody believes we should do so much testing,” Trump said during Monday’s coronavirus briefing. “You don’t need so much. The reason that the Democrats and some others maybe … they want maximum because they want to be able to criticize, because it’s almost impossible to get to the maximum number, and yet we’ve been able to do it already.”

TRUMP: “Not everybody believes we should do so much testing. You don’t need so much. … Democrats and some others … want maximum because they want to be able to criticize because it’s almost impossible to get to the maximum number and yet we’ve been able to do it already.”