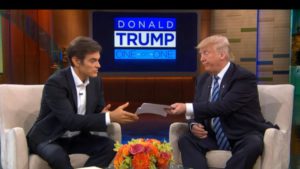 As you may be aware if you have read my previous columns on Mr. Berkwitt’s Ringside Report, I have been scrupulous in my adhering to my statement of and absolute belief in, the avoidance of plagiarism in any matter, that unlike a good few others, particularly one who lost his writing jobs with the New York Times, Miami New Times, Miami Herald and several others for his unending use of other people’s written material without providing proper credit. You may again be assured that I will never engage in the unscrupulous tactic.

Now, why do I mention that again? Very simply, because I am going to quote word for word from an article which ran today in as many American (and Canadian) newspapers as carry stories from the Associated Press, the furthest thing from “fake news” or “alternative facts” as there can ever be (In another column, and likely shortly, I will deal with those four words, which are perfect examples of horrible examples of sophistry. The only thing that I will do right now, though, relative to those two examples of sophistry, will be to define the word (“sophistry) for those of you who may not be familiar with it: Sophistry is reasoning (or words or wording) that seems plausible on a superficial level but is actually unsound, or reasoning that is used to deceive. Examples of sophistry are, simply put, words such as “fake news” and/or “alternative facts,” neither of which is either legitimate or valid. Again, though, that will be discussed further in a later column)

The Associated Press story which is being referred to here, and which ran nationally on Wednesday, April 22, 2020, was written by Todd Richmond, and is headlined “More deaths and no benefit from malaria drug in VA virus study.”

As you may remember the blathering, blithering, bulbous, bloviating, self-proclaimed bastion of brilliance in the White House, with no scientific back up of any kind, simply proclaimed that hydroxychloroquine was saving people’s lives and was and would be the cure-all for Covid-19. Simply put, according to the article, it did neither and was absolutely not.

To quote directly from the article, “Researchers analyzed medical records of 368 male veterans who were hospitalized with confirmed coronavirus infection at Veterans Health m Administration medical centers and died or were discharged by April 11

“About 28% who were given hydroxychloroquine plus usual care died, versus 11% of those getting routine care alone. About 22% of those getting the drug plus azithromycin died, too, but the difference between that group and usual care was not considered large enough to rule out other factors that would have affected survival.”

The article goes on to state several salient facts which not only put holes in Trump’s nonsensical, thoughtless and aberrative comments (as well as Dr. Oz’s) but made the following points: “The drug (referring to hydroxychloroquine) has long been known to have potentially serious side effects including altering the heartbeat in a way that could lead to sudden death.”

And, “Many doctors have been leery of the drug.”

Why is all of that important? Because while we do not know about Dr. Oz, we do know that, according to “The Daily Beast,” in an article taken directly from The New York Times, Trump has a direct financial interest in the maker of the drug.

Now, ladies and gentlemen, and frankly, the nonsense about him having a “small financial interest….” is complete and total hooey, or to put it his way, “fake news,” for if you continue read the story, you will note that the Times reported that all of his family trusts have substantial interest in the holders of mutual funds which own a large amount of stock in the company which makes the drug which Trump was touting so vigorously. It is time, all, for all of us to do the right thing, and the right thing, in this case, is to do all and everything we can to get that philandering low-grade excuse for a human being out of the White House.

Stay well, all, and stay safe, and remember that one man—Trump—is absolutely, positively responsible for every Coronavirus related illness and death in the United States He is because of his indifference, uncaring, non-, mis- and mal-feasance that we are burdened with this horror.