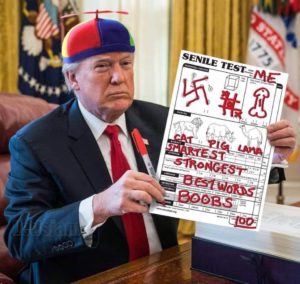 It’s the time of year that people are thinking about school. Well it isn’t but in one popular Washington residence the time has come to consider if the current arrangements fit the youngest and quite frankly, according to the head of the household, they don’t. He has decided to take things into his own hands and talk directly to a new school.

Most of the rest of the household find this absolutely terrifying but they know better than to try and stop Mr Trump doing anything, so they tag along as he gets to the school.

It takes the usual 15 minutes to get through the door at the entrance – he ain’t great with push/pull things believing that any kind of negotiations should only go one way – his.

Mr Trump wanders aimlessly through the hallway wondering how long it would before he is met by a teacher with a side arm or maybe a mall type security guard when a small, red headed young woman appears from a side door and asks, “Can I help you?”

Mr Trump is unfazed but slightly confused, as he is not used to not being recognized… an aide jumps in to help out – something they are very used to doing…
“Mr Trump would like to talk about his son.”

“Is he a pupil at our school?”

“Not yet…” The aide smiles hoping that the young woman realizes how big a deal this may be for her school, the glances at Mr Trump and realizes that his vacant stare means he is still trying to work out if he can grab her by the pussy. The aide decides to take the initiative.
“Can we perhaps come into your office to talk about this possibility?”

The teacher looks slightly confused and pulls her mask to one side to try and make herself clear. “We have a pandemic and I don’t know if you have heard, we are closed, and we should be observing social distancing.” The last remark is point directly at Mr Trump who is closing in on her, unmasked and perhaps even a little aroused?

Mr Trump turns to look at the aide, in that side swipe gesture he does that makes him look like his neck doesn’t work, hoping he would deal with this obstruction to his behavior.

The aide speaks, “Yes, we are fully aware, and we would like to discuss the possibility that once we have got through this er… pandemic…”

Mr Trump speaks, thinking he is funny. “Kung Flu! That’s what I like to call it the Kung Flu.”

The teacher is aware that there are howls of laughter filling the hallway as all the people who came with this man are laughing far too hard for it to be real.

In true teacher like fashion, she tries to take command of the situation, “Perhaps we can meet in the atrium beyond these doors then? There is plenty of room there to allow us to meet safely.”

Mr Trump turns and enters through the double doors first. The teacher takes some hand sanitizer with her and realizes that a cold shower is what her visitor might need whilst just a shower would do her after he leaves.

Once settled she decides to tackle the man directly and asks Mr Trump, “What are you looking for here? I mean we may not be open until the fall”

Mr Trump “I would say that when we talk about the fall, that seems like a long time. It’s a long time.”

The teacher seems unimpressed by Mr Trump’s ability to deal with time.

“Well yes it is, but we are only observing what other countries have been doing…”

Mr Trump is not impressed “”In Germany, Denmark, Norway, Sweden and many other countries, SCHOOLS ARE OPEN WITH NO PROBLEMS. The Dems think it would be bad for them politically if U.S. schools open before the November Election, but is important for the children & families. May cut off funding if not open!”

The teacher is rather surprised at Mr Trump and his point of view so tries to counter with, “All those countries have suppressed the virus in one way or the other, whereas we are rocketing up at record levels — making it harder and less safe to open the schools. I mean the advice from the US Centers from Disease Control and Prevention with their guidelines for safely reopening schools…

Mr Trump interrupts with “That’s all very tough and expensive.”

The teacher is beginning to get to a default position where she wants to treat Mr Trump like she would a pre-schooler, “But what about the raging outbreaks?”

“These are mere fires that will be put out and at the White House we are not closing.”

The teacher is now confused as to which member of his family should be at the school – the father or the child – but tries to bring the whole discussion to a close. “It is an inferno in some parts of this country, it won’t go away with magical thinking. An urgency to open the country is really one of the prime reasons we are where we are now. I wouldn’t like our children to be exposed in such a way.”

From outside the atrium the rest of the White House staff then see Mr Trump explode. None of them can hear what he says but the doorway to the atrium is thrown open and a red-faced Mr Trump barges his way out and past them to the push/pull door. He instructs one of the armed guard to shoot out the glass. Instead the armed guard opens it and offers Mr Trump a way out.
Once again, he thinks to himself, that it appears that the American people are looking to give Mr Trump a way out and he takes it.

The aide who spoke with the teacher is left to try and apologise for the actions of his boss but when he is asked by the teacher “What is a Fake School?” he mutters his need to get back to the White House before the toys are taken out of the pram again…

Whilst the author asserts his right to this as an almost original tale, any similarities to persons real or imagined are deliberate. However, as there is little or no evidence that a Mr Trump ever went to a school, as far as he is aware, this is clearly fictional and never actually happened, though many of the words were tweeted by a Mr Trump.

The fact is that during the week Donald Trump tweeted the words quoted about the reopening of schools and that he wanted it done now. Some have suggested he sounded like a petulant child, others that he is a danger to all. America’s COVID deaths are now escalating on a scale that is terrifying, meanwhile Donald Trump is fiddling things in the White House. An Emperor Nero once did that whilst Rome burned…