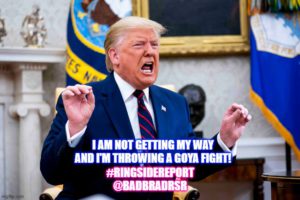 Every day when we arise we are telling ourselves that “it can’t get any worse.” Regretfully and unhappily, it can and it will, so long as the orange haired orangutan is defiling the Oval Office every time he steps into it and spouting his utter nonsense regarding the plague we are now suffering through.

As you know by now, I am neither Posner nor any other plagiarizer and anything and everything that I use from any source is properly attributed. A wonderful example is the below from my (correspondent) friend Richard R. (yes, he is a real person) and he most kindly sent the following which I now pass on to you for your thoughtful consideration.

“Another grand and glorious day in the country where every day is a holiday and every night is a Saturday night and every meal is a banquet …unless you are one of the 3,712,445 Americans who have contracted covid 19, or the 140, 000 plus Americans who have died or you live in the 32 states that are setting records for infections.

(From H. S. V.: I do not know how many of you are in one of those states but you may have noted that Florida is now the epicenter of the virus and the totally dysfunctional fool who is the governor is refusing to issue a mandatory state wide face mask order)

“The president opposes a national mask mandate, proposes a reduction in money in a supplemental appropriation for testing… Trump largely ignores the pandemic as death toll rises… nearly 1000 deaths per day. …Trump denies the science which continues to evolve daily

“Trump says if we do not test, identify, isolate, contact trace we would not have so many cases…. that is the same as saying a chair has four legs; a dog has four legs so therefore, through Trumpian logic, a dog is a chair… I do not know what Trump is smoking but I certainly do know that the second hand smoke of whatever it is he is smoking is killing Americans at record rates.

“While death is the end, testing is the means to identify and isolate the infected so they do not infect others. The rate of positive cases tell us how effective we are being in controlling the virus….Trump has surrendered to the virus …no leadership…no national plan to support states…his FDA, CDC, and NIH are now in full attack contradicting Trump’ bizarre rhetoric…the science is evolving everyday…more is learned about the virus…clearly the use of masks and social distancing works… it’s the science, stupid…if we do not follow the science we will not move in the right direction.

“The virus rages in 32 states, the economy is in the tank, our allies do not trust us and Trump does not demonstrate any and certainly not anything even barely resembling, bold leadership. The question before us is “if Trump has not governed in his first term other than to do whatever he wanted to or could do to enrich himself, than what makes you think he can govern in a second term in any way, shape, form or manner that will benefit the American people, rather than himself and his totally dysfunctional family?”

“Next watch for the dog whistle about the suburbs.”

From H. S. V.: There is little more to say or to write and the facts are clear: the longer that Trump and his Hitlerian Trumpite cultists are in control of our government the worse the situation will become, the most perfect example of the most horrific example being, of course, his utter stupidity, along with Betsy DeVos, in demanding that our schools open no matter the cost. Are you going to send your children? Although mine are now grown, were they still little people, I sure as hell would not.