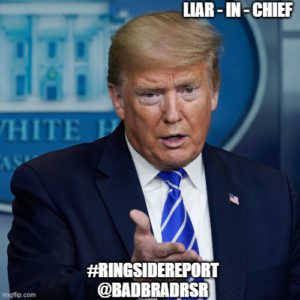 The below was not written by me, but, rather, comes from a very reliable source, a regular correspondent who lived in the Northeast and is highly attuned to the political situation in this country.

I ask only that you read it carefully.

So, you read phony websites and believe that stuff? Here are facts, not fiction and not made up by the big bad liberal media.

It’s there and on TV all day long, be it liberal or conservative or your favorite Fox (as in Faux) news programming that deliberately and purposefully leaves out anything bad about their fearless dear leader, so spread this word, but read on and if you still believe in the phony websites out there spreading their disinformation originating from who knows what foreign power, then go on and make sure you have your brown shirts ready and are practicing your goose-stepping and your heiling.

Let’s dispense with the myth that the Trump administration has no strategy related to the coronavirus pandemic.

In his statements and the actions of federal agencies under his control, as well as the positions held by his Republican congressional caucus, the strategy is clear: Use the pandemic to make America a crueler place.

In only the last few weeks, Trump and the Republicans have:

— Made it easier for businesses to fire workers who speak out against discrimination;

— Undermined the U.S. Postal Service, increasing the isolation of Americans for whom the mail is a lifeline to the outside world, and of course posing a possible issue with mail-in ballots in the coming election;

— Blocked the extension of the $600 increase in pandemic unemployment benefits, which expired last week, for nearly 30 million workers.

In some cases people are overpaid and we want to make sure there are the right incentives.

That’s just a sampling of concrete actions. Trump’s dereliction of duty as leader of the federal government goes much further.

He has exploited the pandemic to divide the American public by turning state and local efforts to stem the contagion into partisan purity tests.

His pronouncements about such fundamental policies as mask-wearing and social distancing have been consistently contradictory. When the facts contradict Trump’s claims, he lies about them or attacks the truth-tellers, even when they’re members of his own team.

He continues to push hydroxychloroquine as a “miracle” treatment for COVID-19, despite incontrovertible evidence from random controlled trials, the gold standard in medical research, that it doesn’t work and may even be hazardous for some patients.

Trump praised as “very impressive” a spectacularly unhinged and data-free public appearance by Stella Immanuel, a Houston doctor who called the drug a “cure” and maintains on her website that “serious gynecological problems, marital distress, miscarriages, impotence, untold hardship, financial failure and general failure” are caused by “evil spiritual marriages” and “demon sperm.”

Following Trump’s lead, the GOP faithful seem to have taken a thoroughly defeatist attitude toward the pandemic. A Republican corporate CEO (now retired) with whom I’ve long conducted a cordial exchange of differing opinions wrote me in mid-July to say he doesn’t “condemn the President as I don’t believe anyone would have handled the situation materially better.”

This is, of course, absurd. Most European and Asian countries, including some that exist at the global poverty line, have handled the pandemic “materially better” than the U.S.; indeed, only Brazil, which is led by a Trump sycophant, has handled it worse.

New York was the poster child for the ravages of COVID-19 in March and April, when the disease was much more of a mystery, but it learned from its mistakes. Florida, the statistics indicate, hasn’t bothered to learn from New York’s mistakes and seems determined to make the same ones on its own.

Consistent messaging and policy initiatives from the White House almost certainly would have helped communicate to the rest of the country the lessons learned by the early-hit states. But Trump and his team didn’t create any. Its advisories on reopening schools have been confused and inconsistent but also doctrinaire and impractical.

“The rule should be that kids go back to school this fall,” Education Secretary Betsy DeVos said in mid-July. “And where there are little flare-ups or hot spots, that can be dealt with on a school by school or a case by case basis.”

DeVos backed up her useless observation with a threat to withhold federal funds from schools remaining physically closed, though she couldn’t cite any authority for withholding federal funds from any schools, much less any ideas for how school districts could deal with “little flare-ups or hot-spots.”

In October 2018, more than two years into the Trump era, Adam Serwer of the Atlantic defined the Trumpian politico ethos. “The cruelty is the point,” he wrote.

Since then, the data points Serwer plotted have only metastasized. Whether the cruelty is truly the point as he concluded, it’s certainly true that some of the administration’s policies can’t be explained any other way.

Some don’t even make sense when measured against their own goals; for example, even Republicans fear that Trump’s attacks on mail voting and his efforts to undermine faith in the election will discourage their own voters.

Let’s take a look at the most recent examples.

The Republican-fostered logjam on extending the $600 weekly unemployment benefit is the move with the most dire consequences for the largest number of Americans — 30 million unemployed and their families.

Much of the news reporting on this holdup has laid it upon “Congress.” That’s not right. The Democratic-controlled House called for extending the $600 weekly benefit through next January via a measure it passed in May. The Republican-controlled Senate never took it up.

As the July 31 expiration date for the benefit approached, the Senate and White House finally entered negotiations, opening with a proposal to cut the benefit to $200.

As we’ve reported, the GOP’s working hypothesis is that the $600 benefit, by exceeding the pre-layoff income of some workers, encourages them to stay home instead of returning to work. As we’ve also reported, there’s absolutely no evidence that this has happened, outside a few limited cases.

Treasury Secretary Steven T. Mnuchin nevertheless hauled out the argument during an appearance Sunday on ABC News. He had nothing of substance to add to the discussion.

“In some cases people are overpaid and we want to make sure there are the right incentives,” he said. ABC’s Martha Raddatz immediately challenged his implication that the benefit constitutes an “incentive” not to work, citing an analysis by 10 scholars at Yale finding “no evidence that the enhanced jobless benefits… reduced employment.” That confirms other research finding no employment reduction.

Mnuchin tried to counter Raddatz’s challenge by citing a University of Chicago paper that purportedly countered the Yale findings. No sale: Peter Ganong, the Chicago paper’s lead author, promptly responded via Twitter that his paper did not say what Mnuchin seemed to claim. The Chicago paper can be found here.

What is known, however, is that ending the unemployment benefits boost will depress the economy substantially, leading to an economy smaller by 2% and 1.7 million fewer jobs by the end of this year, according to economist Ernie Tedeschi of Evercore ISI.

Given that a crippled economy can’t be good for Trump’s reelection chances or the GOP, if cruelty isn’t the point of a cut in unemployment benefits, what is the point?

Meanwhile, Trump-controlled government agencies have been acting to make life harder for working Americans as well as those struggling with pandemic furloughs and layoffs.

The Department of Agriculture, for instance, relieved families on food stamps — the Supplemental Nutrition Assistance Program, or SNAP — of the chore of regularly re-certifying their eligibility for the benefit. Normally they would have to assemble financial documents such as pay stubs and utility bills and present them to a government employee in person.

USDA suspended that procedure, purportedly for the duration of the crisis. But the agency has refused to extend the forbearance past the end of this month despite requests from Maryland and the District of Columbia, according to the Washington Post.

That merely means another obstacle placed before families facing challenges putting food on the table, at the very moment when those challenges are becoming intensified.

Then there’s the National Labor Relations Board, which under Trump has been rolling back workplace protections instituted under the Obama administration.

In a July 21 ruling, the Trump-appointed NLRB majority gutted a standard affording protection to workers protesting allegedly discriminatory management actions, even when the workers’ language was extreme.

The ruling removes that protection. The specific case involved a black worker at a General Motors plant in Kansas City, Kan., who was repeatedly suspended for protesting what he said were racially discriminatory policies by responding to managers in what they said was the tone of “a slave speaking to a master.”

The majority said that the board had no legal authority “to referee what abusive conduct is severe enough for an employer to lawfully discipline.” But the ruling gives employers considerably more latitude to discipline complainants.

Trump’s most far-reaching attack on American norms of daily life may involve the U.S. Postal Service, which Trump has been attacking virtually since the start of his term.

Until now, he has failed to chip away at the service, but that seems to have changed with his appointment of a political contributor named Louis DeJoy as postmaster general.

DeJoy ended overtime for postal workers, all but ensuring that some mail will fail to be delivered on time. “We may see mail left behind or mail on the workroom floor or docks,” according to an internal memo distributed to all workers.

The degradation of mail service makes no sense, especially as volumes are expected to rise as mail balloting begins. This may have a purpose beyond mere cruelty, to be sure: Trump asserts without evidence that mail balloting is vulnerable to fraud, so efforts to complicate the process or slow it down will feed into his claim.

He seems to believe the mail balloting favors Democrats, also without evidence, so that may be another motivation behind DeJoy’s abandonment of postal efficiency.

The record wouldn’t be complete without noting Trump’s assault on the Affordable Care Act, including his support of a federal lawsuit filed by Texas and other red states aimed at getting the ACA declared unconstitutional. Trump promised two weeks ago that he would have a replacement healthcare reform act ready to sign within two weeks — that is, Monday.

Needless to say, no such venture exists. But millions of Americans face the loss of their health coverage, and uncertainty about what lies ahead, as long as the Trump administration works to undermine the coverage they have. Here, for sure, the cruelty is the point.

The above is, at best, complimentary; at worst it is an exposition of only a few of the horrors created by this administration, an administration intent on not just dividing the American people but destroying the nation’s will to stand up to the tyranny which Trump and his boot licking supplicants and minions would like to see put in place. I hope that each of you will help to see that that does not happen.