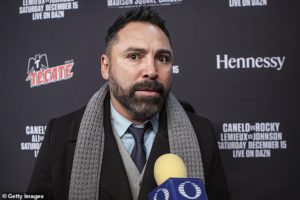 Sometime last week, the news broke that one of the most recognizable faces in the history of boxing would be making a comeback just a few years shy of his fiftieth birthday. Oscar De La Hoya won eight world championship titles across six weight classes after he turned professional in 1992. His bouts were often as much social gatherings as they were fights, all the way up to his decision to call it quits after being thoroughly outclassed and beaten to and from the punch by Manny Pacquiao in late 2008. The native of East Los Angeles had to endure the death of his mother, Cecilia in 1990 before he fulfilled a promise to her by capturing a Gold Medal at the 1992 Olympics in Barcelona. He had and continues to have crossover appeal in the fringe sport of boxing, from his early days as a professional and well into his days as a promoter for the company which carries his moniker, Golden Boy. If we take a brief moment to think about it, then even the most casual fight fan as well as outside observer knows at least the name of the man who won his first world title in the Spring of 1994, when he stopped Jimmi Bredahl in the tenth round for the WBO super featherweight crown.

Alongside the truth that he was a terrific fighter, the fact that he was easy on the eyes attracted many more fans to the arenas or television sets as well. His contests drew millions to houses and bars in the 90’s and 2000’s and his contests set a new standard within the pay-per-view spectrum of the sport. De La Hoya claimed wins against such names as Jorge Paez, Rafael Ruelas, Genaro Hernandez, Julio Cesar Chavez, SR. Hector Camacho, SR. and Wilfredo Rivera. In April of 1997, De La Hoya was tested to his limits, if not his outer limits but was nevertheless awarded a wide, however still hotly debated unanimous decision victory over Pernell Whitaker. His mass appeal and importance to the strength of the sport, especially when combined the income generated by TV contracts, sponsorships and the mad rush to host one of his contests meant an almost certain downpour of cash. Let’s face it. The crowds didn’t swarm to places like the Sun Bowl in El Paso or the Alamodome in San Antonio because they wanted to see De La Hoya in an evenly matched, back and forth battle. Much like heavyweight icon Mike Tyson had done a few years earlier, the bout was an event, in and of itself. The competition was but a side note.

His finest moment in the ring may have 21 years ago in Las Vegas against Ghanaian Ike Quartey for the WBC world welterweight championship. The bout which took place on February 13, 1999 saw the two men trade knockdowns in round six and many still argue (myself included) that even the second time De La Hoya sent Quartey to the canvas in the twelfth wasn’t enough to eke out a win. Sound familiar? Are there any fighters these days whose prominence, marketability and appeal would take anywhere from a flick to a crunching wallop if they tasted defeat when an even bigger showdown loomed on the horizon? Quartey found out that this may have indeed been the case because at the time, a mega fight with Felix Trinidad was simmering, provided Oba Carr was dispatched of beforehand that May. All went as planned and even twenty years later, boxing circles still debate what went down on September 18, 1999 at the Mandalay Bay Hotel in Las Vegas.

What had been billed as “The Fight of the Millennium” was anything but and as we know, Oscar’s then-unblemished record flew the coup. Maybe he had relaxed for too long in the dressing room with Queen’s “Bicycle Race” careening through some headphones. Critics accused him of coasting, which he claimed was done at the behest of his corner at the end of round nine. He lost another close fight to Shane Mosley nine months later, then went through the late, great Arturo Gatti (TKO 5, 3/24/2001) and then Spaniard Javier Castillejo (UD 12, 6/23/2001), the second fight of which many of us were introduced to a little man from the Philippines who was a late fill-in to face Lehlo Ledwaba, whom he obliterated in six rounds for the IBF super bantamweight title. The little man would surface again down the road one day.

By this time, “The Golden Boy” was campaigning at super welterweight and his unanimous decision victory over Castillejo awarded him the WBC championship in the weight class. He took some time away from the ring, yet the show he put on upon his return on September 14, 2002 was one for the books. To this day, Oscar has readily admitted that his eleventh round stoppage of Fernando Vargas was the most satisfying of his career. One year later, he lost another close one to “Sugar” Shane Mosley in Las Vegas, after which the move up to middleweight came calling. At the time, the thought of a clash between the most sellable face in the game for the middleweight championship was most certainly a game one. There’d be no need to go overboard with hyping up ‘De La Hoya vs. (Bernard) Hopkins’, but that’s always the way to go. So, the die was cast and the train got rolling. All Oscar had to do to solidify his spot as a legit candidate at 160 pounds was to beat German champion Felix Sturm for his WBO strap and the pieces would easily fall into place. Bernard Hopkins was on the undercard and he made easy work of Robert Allen for the eighteenth successful defense of one of the three middleweight titles he held at the time, and he even made his way into the ring after De La Hoya managed to win, seven rounds to five on the scorecards of all three ringside judges.

Although many insist that he was gifted the decision (you can probably drink a fifth of whiskey and still come to the same conclusion), a bigger and most certainly lucrative bout was in the works that June of 2004 evening in Las Vegas. Hopkins openly challenged De La Hoya in the center of the ring for a unification bout and although the champion from Philadelphia held three of the four alphabet titles at the time, he was most importantly the lineal champion of the division. For the first six or seven rounds, De La Hoya and Hopkins fought a mostly chess-like contest, although by the eight, the differences in talent began to seep through the cracks. Midway through the ninth on that September night at the MGM Grand in Vegas, the champion created just enough space to land one of the most surefire shots in all of combat sports, the left hook to the liver. Oscar appeared to withstand the punch for a mere movement, after which the East LA native was sent writhing in sheer pain to the canvas and was counted out.

He returned after more than a year off for Cinco de Mayo weekend in 2006 to face Ricardo Mayorga for the WBC super welterweight title (TKO 6) and then came May 5, 2007. We all remember where we were and what our thoughts had told us when “The World Awaits” was finally upon us. We were treated to a new concept, “24/7” on the HBO cable network. To be sure, the four-part buildup to the contest between De La Hoya and Floyd Mayweather, Jr. was effectively highlighted in “De La Hoya, Mayweather 24/7”, as the all-time records for pay-per-view and ticket sales were smashed. 2.45 million pay TV buys stood until 2015 and the $165 million generated at the gate remained in place until 2015 as well. To most, Mayweather did enough to win, although perhaps not convincingly. Floyd was just 30 years old at the time, while De La Hoya was 34. We shouldn’t fail to remember that footage of the bout itself may have been sent to black sites around the globe to help intelligence agencies extract important information from enemy combatants.

Oscar would win a comeback contest against Steve Forbes in May of 2008, which may have been remembered more so because it was on regular HBO and not pay-per-view. Then came the meeting with the aforementioned little man from the Philippines, who had since become one of the best pound-for-pound fighters on Earth. Manny Pacquiao agreed to face De La Hoya at a catchweight of 145 pounds. During the buildup to the “Dream Match”, I clearly recall briefly taking to Oscar when the multi-city press tour stopped in San Antonio. He may have been a half hair shorter than me and all I could wonder was how, at the age of 35 he would melt himself down to 145 pounds. We got our answer on December 6. Weight drained and more than a half step off the beat, Pacquiao went to town on De La Hoya for he better part of the eight rounds the bout lasted. At the end of the eighth, with his left eye nearly swollen shut and having endured what HBO’s Jim Lampley called “the reconfiguration of Oscar De La Hoya’s beautiful face”, the night was over for “The Golden Boy” and that’s the last time we saw him in the ring. As a fighter, that is, as he’s been the head of one of the most successful promotional outfits in the game.

With several world champions to its credit and the ability to consistently put on excellent fight cards, Golden Boy Promotions has rarely failed to deliver. So, why come back now? Ask anyone who athletically active, whether in the professional ranks or all the way down to the weekend warrior if they like being told that they’re getting too old to do certain things. The itch to get back to the way things were, especially if the current state of affairs within one’s realm isn’t up to their standards is a tough one to alleviate. De La Hoya has had battles outside of the ring as well, especially with alcohol, which he’s hopefully conquered. By all accounts, he has, so when certain words started to percolate within the boxing cauldron, he confirmed the suspicions.

“The rumors are true and I’m to start sparring in the next few weeks,” he told ESPN last Wednesday. He further commented on his lack of energy that night against Manny Pacquiao as well as the attitudes of many of today’s fighters who want the rewards of the sport without the necessary sacrifice to attain them. De La Hoya said he was feeling great and that he’s in great shape along with his jab coming back better than ever. He further stated that he’s looking to take on any of the top names as he seeks to return somewhere between 154 and 160 pounds. Oscar officially retired in 2009 with a record of 39 wins (30 by knockout) against six defeats and was inducted into the International Boxing Hall of Fame in 2014. We’ll see how this one goes, won’t we? Whether a triumphant return, a flash in the pan or a night to forget, this may be worth a look. Who are we to disapprove?