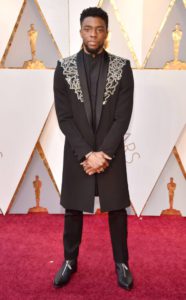 This is truly heartbreaking. Actor Chadwick Boseman, star of such blockbusters as BLACK PANTHER (2018), and AVENGERS: END GAME (2019), died August 28, 2020, in Los Angeles, California, after a four- year battle with colon cancer. He was 43 years old.

Boseman was born and raised in Anderson, South Carolina. He graduated from T.L. Hanna High School in 1995. He attended college at Howard University in Washington, D.C. graduating in 2000 with a Bachelor of Fine Arts degree in directing. While living in Brooklyn, he worked as a drama instructor in the Schomburg Scholars Program at the Schomburg Center for Research in Black Culture in Harlem, New York. He moved to Los Angeles in 2008 to pursue an acting career.

Ringside Report sends our condolences to Boseman’s family during their time of grief.